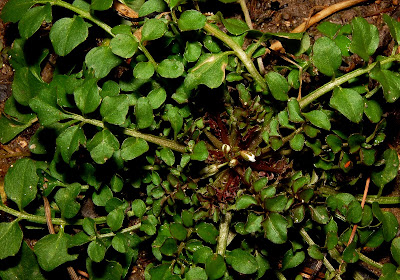 At first glance it seemed that flowers were only in bud, but a close look reveals a flower that's partially open (lower left part of the inflorescence)! This may be a weed, but I saw my first flowering plant of 2012 today, January 1st. The weather forecast for northern Indiana suggests it may be a while before anything else achieves anthesis.
Posted by Keith Board at 7:08 PM

Email ThisBlogThis!Share to TwitterShare to FacebookShare to Pinterest
Labels: Cardamine, Green in Winter

Beautiful poem. Thanks for sharing!

What the dickens is this plant thinking?