Botanists in the Field

Here are a few random glimpses of just a few of the people involved in botanical study in the Midwest. Special thanks to Scott Namestnik and Barbara Plampin for sharing pictures.

Justin Thomas and Scott Namestnik pause for a picture at Flat Rock Creek Heritage Preserve in South Carolina, May 2, 2011. 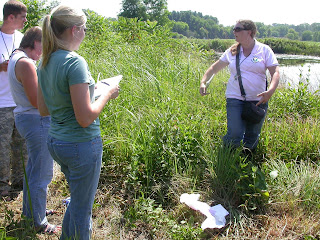 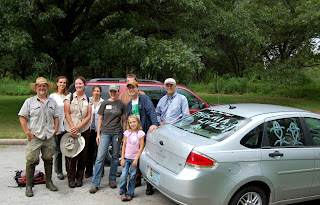 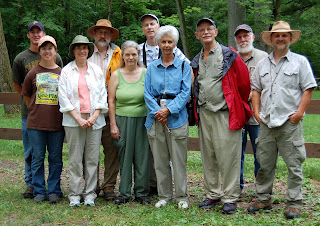 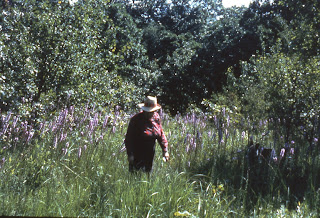 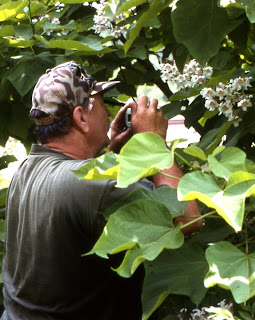 Justin and Dana Thomas, directors of the Institute of Botanical Training, take a break at Taum Sauk State Park in Missouri, July 21, 2007. 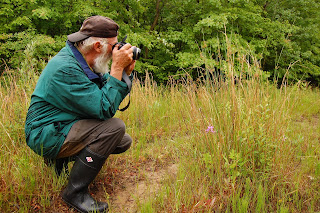 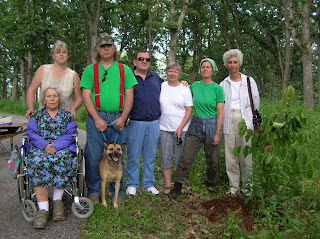 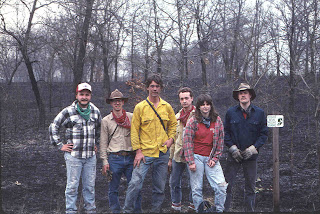 Barbara Plampin and Keith Board identify plants at the "Dritz Pits," Porter County, Indiana, circa 1991.

Jerry Wilhelm and Floyd Swink at work in the Morton Arboretum, Lisle, Illinois, 1974. 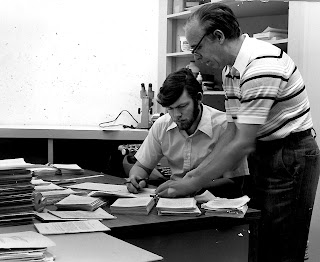 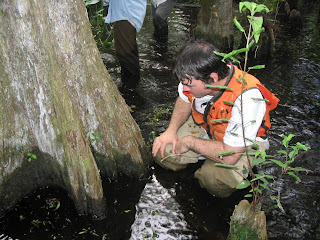 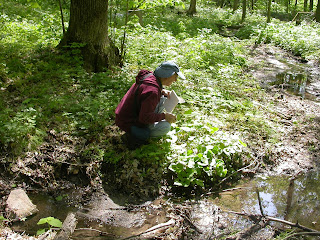 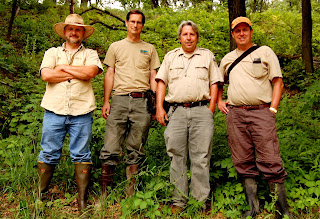 Peter Grube pauses for a picture in a sandy meadow near New Buffalo, Michigan, June 25, 2008. 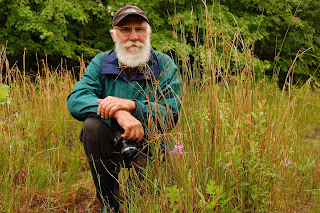 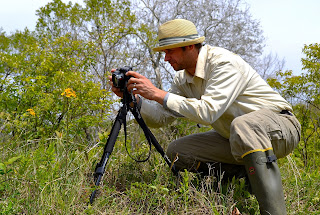 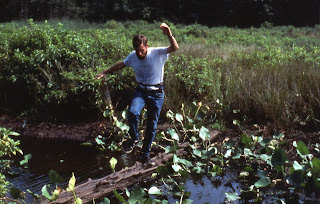 Ken Dritz and Keith Board pause near a railroad in Chesterton, Indiana, after photographing Aegilops cylindrica, Jointed Goat Grass, circa 1998. 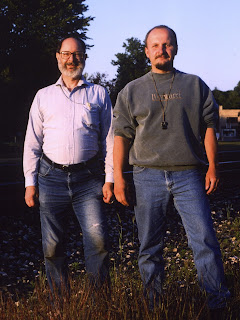 It was my good fortune this past summer to add two additional native orchid species to my list of Indiana native orchids photographed in situ. Albeit these two new species are now considered to be extirpated from the state. Having photographed all of Indiana's orchid taxa with known populations in the state as described in Michael Homoya's Orchids of Indiana, I have had to travel to adjacent states to photograph those six species that can no longer be found here.

Platanthera leucophaea, eastern prairie fringed-orchid, is federally listed as threatened or endangered wherever it occurs today, but it was once quite abundant throughout the midwestern prairie region. Although by the time the early Indiana botanists were active the species had succumbed to the plow in its prairie habitat, and the survivors were found only in bogs and other areas too wet to plow. A few populations can still be found in the surrounding states of Illinois, Michigan, and Ohio. And one small population still exists in Indiana, discovered less than 10 years ago, after an absence of more than 50 years. Its location is a closely guarded secret, and rightfully so. And so, for all intents and purposes, P. leucophaea is extirpated with respect to its accessibility. But with the knowledge that this species, missing for that great length of time, then rediscovered--gives hope that any of the other five extirpated species might also be found once again.

A. L. Gibson, a young and very gifted botanist, blogger and photographer from Ohio, generously shared a site near Dayton where this species literally grows along the roadsides just outside the mowed area created by the highway department. In a wet sedge meadow beyond the fenced roadside Andrew found more than 200 flowering plants the year before. When I received Andrew's call this past June that the orchids were in bloom I was on my way to photograph Pogonia ophioglossoides, adder's mouth orchid, at Miller Woods with Dan, Dan, the Orchid Man, McDowell. It was the second week in June and these small pink orchids were blooming profusely in the interdunal pannes behind the foredunes along Lake Michigan's shoreline. The adder's mouth orchid, or rose pogonia is quite a striking orchid, but my mind was on the trip the following day to Ohio for a new orchid species.

Nila and I arrived at the site near Dayton in late afternoon the following day and met Andrew a few minutes later. As we started walking along the road from the parking area we found the first plant less than 300 hundred feet away, and only 15 feet from the road. It was a beauty, in perfect bloom, and stood more than three feet tall. It had escaped the highway department mower by only a few feet. The remaining orchids lay within a barbed wire fence out of harm's way, or so we thought. There were fewer plants this year than the prior year perhaps due to the lack of rainfall. We counted 35 orchids within a small area, then commenced to photograph them in the harsh glare of the afternoon sun, not the ideal lighting for wildflower photography because of the deep shadows that are produced. We decided to stay overnight and return the following morning to photograph them in the early morning light. The results were much better the following day. Dew had formed during the night and the flowers appeared much fresher.

A few days after returning home I received an email from Andrew. He had just visited the site and was devastated to find that many of the orchids were missing, clipped off near the ground. Deer tend to eat flowers only, and don't bother with the stems, so we couldn't logically blame them. But, a wildflower group had visited the site over the weekend. Makes you wonder. 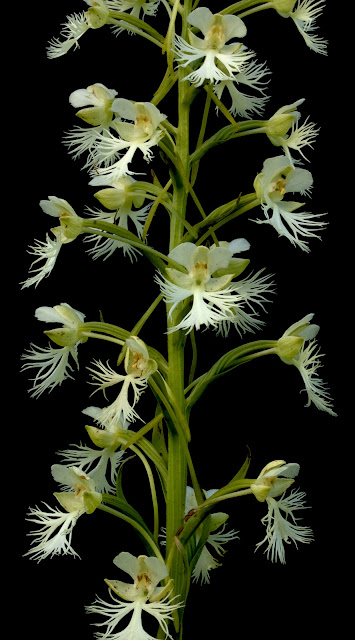 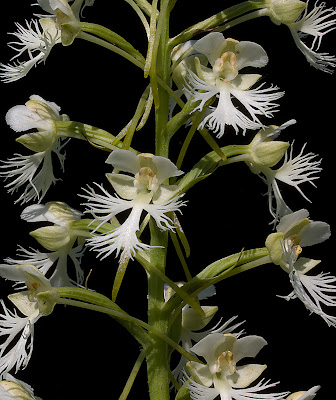 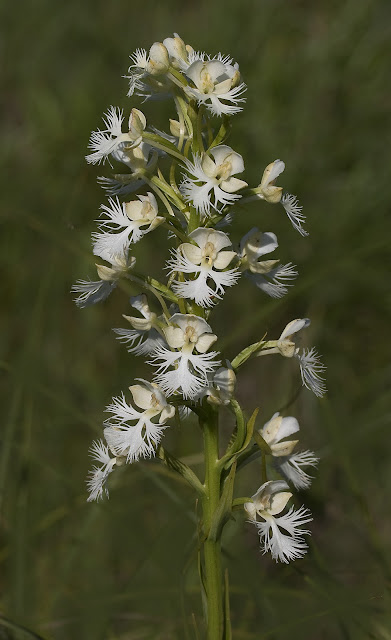 Platanthera dilatata, tall white bog-orchid, was one of the rarest of Indiana's orchids. It's southernmost distribution barely extended into northern Indiana and was known from St. Joseph county only, in an area known as "Six Mile Swamp" near the headwaters of the Kankakee River. Charles Deam reported in 1946 that "This bog and springy area is now being drained". And indeed, no bog orchids were reported in the years that followed, But, in 1984 a small population was rediscovered by a jubilant group of botanists in a remnant of the swamp now known as Kankakee Fen. And they were still there as recently as 1989 when they were beautifully photographed by Lee Casebere. For the most part this small 13 acre fen has been drained today, and in all probability this species has been extirpated from the state. (Homoya 1993)

While planning a trip to the Pacific Northwest this summer I was delighted to learn that Platanthera dilatata could easily be seen along the road in Olympic National Park. It is found growing in the wet seeps where the cool water continuously flows through its root system. We kept our eyes on the wet areas along the uphill side of the road as we slowly drove up towards Hurricane Ridge in the third week in July--and before long, at about mile marker 9 we spotted them.

There are three varieties of Platanthera dilatata, and all three have been found along this road. Indiana plants belong to variety dilatata, tall white bog orchid, with a spur equal to the length of the lip. Variety albiflora, bog candles, has a spur shorter than the lip, and the spur of var. leucostachys, Sierra rein orchid, is noticeably longer than the lip. I certainly didn't feel competent to distinguish between the three varieties in the field. I decided to photograph all of the 13 or so plants that we could find, then closely study the spurs and make size comparisons when the photos were transferred to my computer monitor and enlarged 4X or even 16X. (Brown 2010)

A few weeks later after returning home I was able to convince myself that at least one of the plants I photographed did indeed possess spurs the length of, or slightly shorter than the lip--thus fulfilling my goal of adding another orchid to my Indiana list.

I haven't given up hope of finding P. dilatata in Indiana. I may just venture over to Kankakee Fen in June. What do I have to lose? 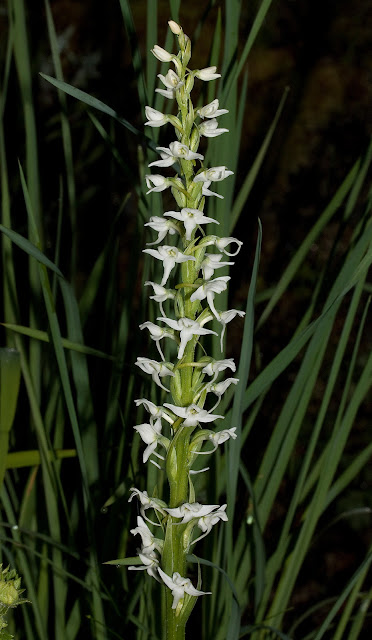 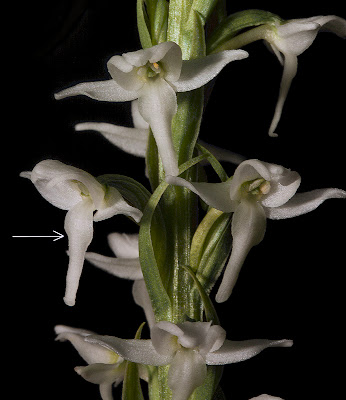 Note the distinctive dilated lip of this species. 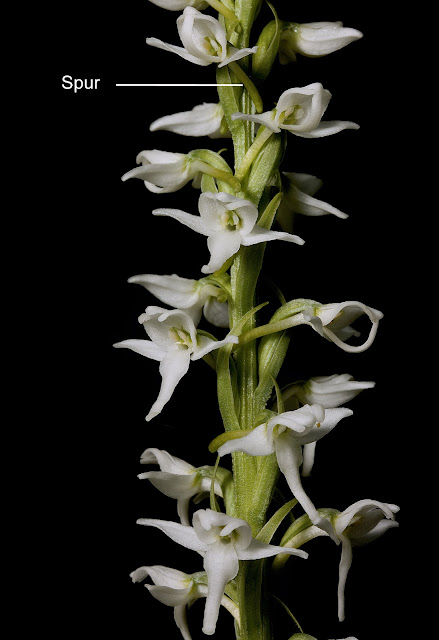 The spurs of this plant seem to be the same length
as the lips, though it's somewhat difficult to accurately
compare the length of curved objects.

Homoya, Michael A., Orchids of Indiana, 1993, Indiana Academy of Science.

Brown, Paul Martin, Woodland and Bog Rein Orchids, A Guide to Native Platanthera Species of the Continental United States and Canada, 2010, University of Iowa Press
Posted by Pete at 9:17 AM 6 comments:

The spikelets on this grass had all disarticulated when I took the photo, but I believe it is Glyceria septentrionalis. This is a large native grass that sometimes can be found in pools of water in shady woods. Photographed at Potato Creek State Park on December 23, 2012. I took this photo in a very big hurry - ice water was pouring into my boots. 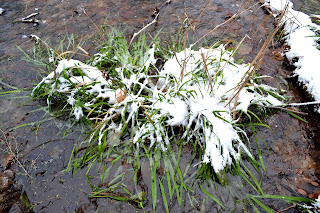