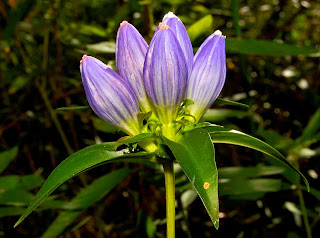 This picture of Gentiana andrewsii is posted for comparison to the Soapwort Gentian posted earlier. This attractive plant often grows in aspen thickets on damp, sandy soil. Compared to Soapwort Gentian, this plant has darker blue flowers that are more tapering into the summit, and this plant tends to grow 2 or 3 times taller. I'm sure that someone who never leaves their lab (and has never gotten their feet muddy or received a mosquito bite) has renamed it, but it is Gentiana andrewsii and always will be. I have a very large botanical library that says it is G. andrewsii.
Posted by Keith Board at 9:10 AM 3 comments:

A Foredune Invader in Disguise

The foredunes along Lake Michigan are home to an interesting early successional plant community, but one that is not terribly diverse.  This ecological zone was part of the renowned studies on primary succession conducted by Henry Chandler Cowles at the end of the 19th Century.  Marram Grass (Ammophila breviligulata), a colonizer that both serves to help stabilize the sand dunes and that requires the moving sand for its own survival, is by far the dominant plant species on these first dunes back from the lake, and other colonizers such as Eastern Cottonwood (Populus deltoides), American Searocket (Cakile edentula), and Seaside Sandmat (Chamaesyce polygonifolia) take advantage of the stabilization work done by the rhizomes of Marram Grass.  Just a handful of additonal species are commonly found in the pure beach sand of these foredune communities.
﻿
Marram Grass is native in counties surrounding the Great Lakes, as well as along the Atlantic coast of the United States.  It also has been introduced in a few counties along the Pacific coast.  Ammophila means "sand lover," a reference to its propensity to grow in pure sand.

The inflorescence of Marram Grass consists of a dense spikelike panicle. Within that panicle are numerous one-flowered spikelets that are each between 8 and 15 mm long. These spikelets are so tightly packed into the inflorescence that they are barely visible without very close inspection.

The leaf blades of Marram Grass are green on the dorsal side and somewhat glaucous and scabrous on the ventral side.  They range from 4 to 8 mm wide when flat, but they are soon involute, making them appear much narrower.  The basal sheaths are often pinkish in color.

So what is the deal with the blue-green leaves on the foredune pictured below?  Unfortunately, this photograph is showing Lyme Grass (Leymus arenarius, formerly called Elymus arenarius), a recently introduced European grass that is quickly invading the foredunes along the Great Lakes.  In the Chicago region, Lyme Grass was first collected in the 1940s invading dunes in Berrien County, Michigan.  Since that time, it has been documented in nearly all of the Chicago region counties bordering Lake Michigan.

The distribution of Lyme Grass in North America is currently dominated by counties bordering Lake Michigan, with records from a few scattered counties bordering other Great Lakes and the Atlantic Ocean.  The genus name is an anagram created from the genus name "Elymus."  Superficially, Lyme Grass can resemble Marram Grass, and it is possible that it has been overlooked by those unfamiliar with the species. That said, there are some distinct differences between the two species.

The inflorescence of Lyme Grass consists of a dense spike with usually two spikelets per node. Within that spike are two- to five-flowered spikelets that are each between 12 and 30 mm long. These spikelets are much more conspicuous within the inflorescence than are those of Marram Grass.

The flat leaf blades of Lyme Grass are approximately 1 cm wide.  They are distinctly and conspicously glaucous on both the ventral and dorsal sides.  The sheaths are not pinkish, but rather are glabrous and glaucous.

Unlike Marram Grass, which spreads by horizontal rhizomes, Lyme Grass has a more cespitose growth form that is not as efficient at stabilizing moving sand.  It is possible that as Lyme Grass becomes more abundant the structure of the foredunes and their characteristic vegetation communities could change as a result.  Unfortunately, Lyme Grass is still planted as a landscaping plant in sandy areas, increasing the likelihood of its continued spread along lakeshores and coastal areas outside of its native range.
Posted by Scott Namestnik at 9:42 PM 2 comments: 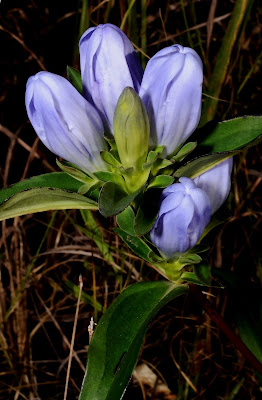 One of my favorite things about autumn is finding gentians. And one of my favorite gentians is Gentiana saponaria, Soapwort Gentian. This one was photographed in a damp sandy meadow in Lake County, Indiana. Welcome Autumn!!!
Posted by Keith Board at 8:04 PM 6 comments:

...On The Annoying Renaming of Plants

I found this extremely funny!