It's hard to believe we've let nearly three months go by without a plant quiz!  Try your luck at this one... 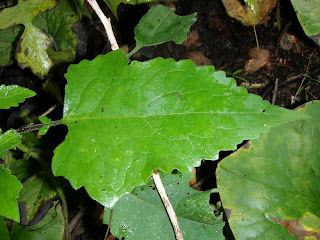 
﻿Polymnia canadensis is known from damp, shaded areas with calcareous soils throughout the eastern half of North America.
﻿
﻿

If you are a regular follower of this blog, you may remember my post about an odd Penthorum sedoides individual that I saw at a mitigation wetland in Lake County, Indiana about a year ago (http://getyourbotanyon.blogspot.com/2010/09/penthorum-dissectum.html).  Last year, the plant that I saw wasn't flowering.  This year, just after telling Abby Lima about the odd Penthorum I had seen the previous year at the site, we found a Penthorum sedoides plant with deeply lobed leaves that had two aboveground stems.  This year, though, both stems were flowering.  I apologize for the poor photo quality, but it was cloudy and raining when we saw the plant, and I only had my work camera with me. 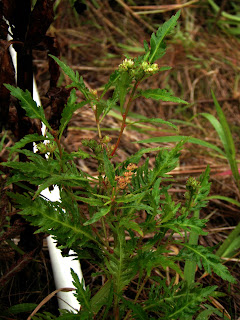 I collected the aboveground portion of the more mature stem to submit to the herbarium at Morton Arboretum (MOR), and only after making the collection did I think to take a photo.  The inflorescences on the other stem were narrower with flowers spread more loosely than on typical Penthorum sedoides.  I made a collection of a typical Penthorum sedoides plant that was growing very close to this plant, and I plan to look at the two more closely this winter (before submitting to MOR) to see if I can find any other differences.  Unfortunately, this is the only Penthorum sedoides individual with deeply lobed leaves that we saw at the site.  I haven't been able to find any named forms of the species, so maybe this is just a mutant, and I was lucky enough to happen upon the same plant with this mutant characteristic two years in a row.
Posted by Scott Namestnik at 1:22 PM No comments: