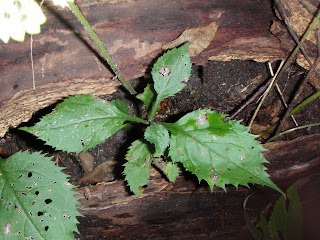 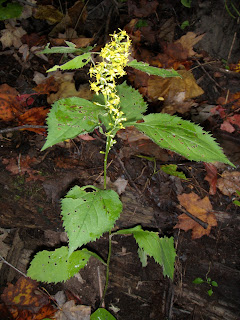 Who says you can't identify asters and goldenrods vegetatively?!
Posted by Scott Namestnik at 5:10 PM 2 comments:

Despite having a wide distribution in Indiana, Spotted Wintergreen is not very easy to find, though it can be locally frequent where it occurs. This little shrub is especially at home in sandy acid soil beneath oaks, but sometimes it shows up in other habitats. Several species of plants that grow in low light conditions have thick, dark green leaves with wide veins that allow light to penetrate deep into leaf tissue and perhaps even pass through to other leaves. Photographed in LaPorte County in December, 2011. 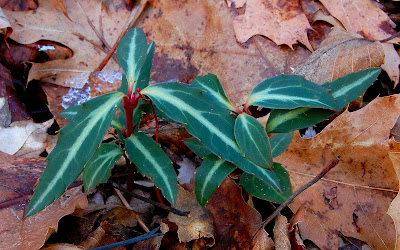 Posted by Keith Board at 7:47 AM No comments:

Email ThisBlogThis!Share to TwitterShare to FacebookShare to Pinterest
Labels: Chimaphila, Green in Winter

Good call, Scott! It is Viola pedata, Birdfoot Violet, a denizen of the dry country. It's especially at home in dry sand among a thin growth of Black Oak and Sassafras in the northern third of Indiana. Charles Deam also found it on sandstone ridges in a few counties along the southern edge of the state. 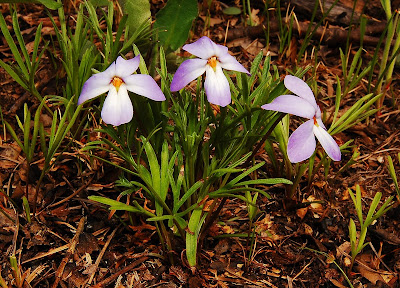 The winter leaves are markedly different than those of the growing season. In winter, the leaves are coriaceous (thick and leathery), on very short petioles, usually very purple, and the lobes are short and wide. New leaves emerge in spring with long and very narrow lobes. Here's a photo of purple winter leaves and the old, withered leaves lying on the ground. 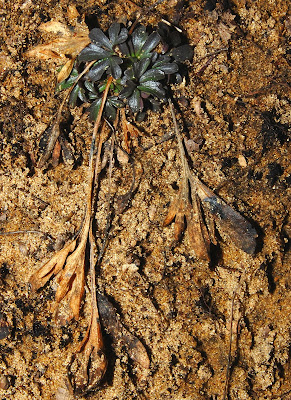 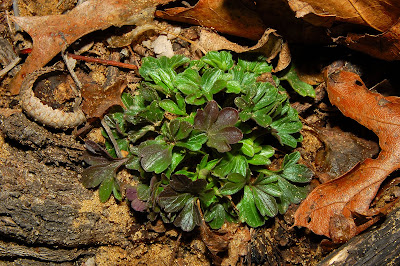 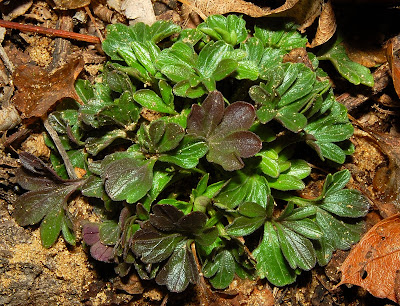 Good call, "Euphorb!" It is Epigaea repens, Trailing Arbutus. At home on acid slopes, this tiny native shrub stays green all winter and flowers in April and May. The flowers emit a very strong, very attractive spicy fragrance that can be detected from a distance. Look for it on the steepest slopes, especially cool north and east-facing ones where mosses are abundant. A photo of this plant in flower is posted below. 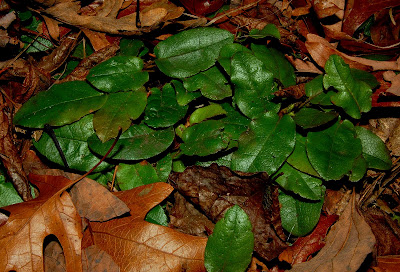 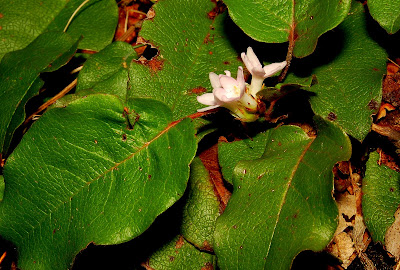 Green in Winter: Little Tea of the Woods 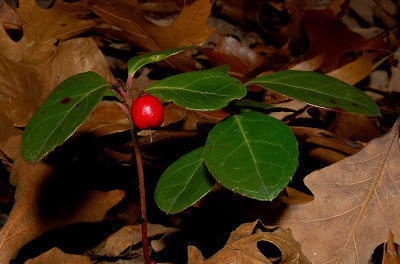 The french fur trappers who came through the Great Lakes region called this delightful little subshrub Petit the de bois meaning "little tea of the woods." It's the plant we know as Wintergreen or Teaberry, Gaultheria procumbens, and it has an enjoyable wintergreen flavor and aroma. Find a forest with sandy, acid soil and this tiny shrub is a possibility. It's one of several native plants that stay green all winter and add color to the winter landscape.
Posted by Keith Board at 9:22 AM No comments:

Email ThisBlogThis!Share to TwitterShare to FacebookShare to Pinterest
Labels: Gaultheria, Green in Winter 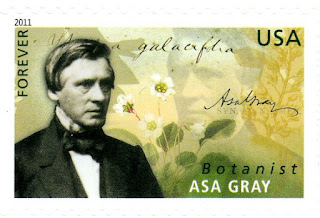 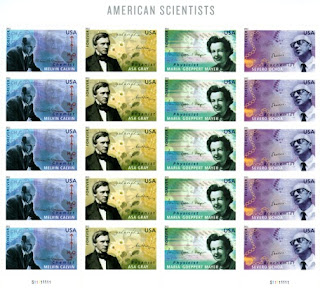 Here is information on each of these scientists from the U.S. Postal Service webpage:

Melvin Calvin (1911-1997) advanced our understanding of photosynthesis and conducted pioneering research on using plants as an alternative energy source. He won the Nobel Prize in chemistry in 1961. The stamp art includes a photograph of him taken by Yousuf Karsh. The background shows excerpts from the carbon cycle, and chemical symbols and structures he used to represent the process of photosynthesis.

Asa Gray (1810-1888), one of the nation's first professional botanists, advanced the specialized field of plant geography and became the principal American advocate of evolutionary theory in the mid-nineteenth century. The stamp art features illustrations of plants studied by Gray and the words "Shortia galacifolia" in Gray's handwriting.

Maria Goeppert Mayer (1906-1972) developed a theoretical model that helped explain the structure of the atomic nucleus; for this work she became the only woman other than Marie Curie to win a Nobel Prize in physics. The stamp art combines photographs of Mayer with a chart and a diagram she used to illustrate aspects of the atomic nucleus.

Severo Ochoa (1905-1993), a biochemist, was the first scientist to synthesize ribonucleic acid (RNA) and competed in the race to decipher the genetic code. He won the Nobel Prize in physiology or medicine in 1959. The stamp shows Ochoa in his laboratory in 1959, along with figures representing some of his work on protein synthesis.

Art Director Ethel Kessler worked with Designer Greg Berger to make each stamp a carefully structured collage of photographs, signatures, and representations of equations and diagrams associated with the scientist's research.

Unfortunately, the post office in my town doesn't carry these stamps.  I was able to purchase them online at face value plus $1.00 for shipping and handling.  These are "forever" stamps, so buy a bunch now and use them forever.

Not to be greedy, but what I want to know is when the Merritt Lyndon Fernald stamps are coming out so that I can stock up on those!
Posted by Scott Namestnik at 7:36 PM No comments:

Email ThisBlogThis!Share to TwitterShare to FacebookShare to Pinterest
Labels: History

Clear water is an unusual phenomenon in northern Indiana, but this stream flows clear even after heavy rains. It is my hope that landscape developers will do more to preserve and restore the natural features of the land in and around their projects, allowing water to move gradually through natural areas, being cleaned as it percolates through soil. Then it could seep into attractive, meandering streams instead of being shunted immediately to mud-walled ditches and fouling everything downstream with silt and chemicals. If we truly had clean, oxygen-rich water in our rivers, lakes, streams, and wetlands, our quality of life would be improved dramatically, and our fish, wildlife, and native plant life would be much more diverse. Special thanks to the many people who work to keep Juday Creek clean and intact! 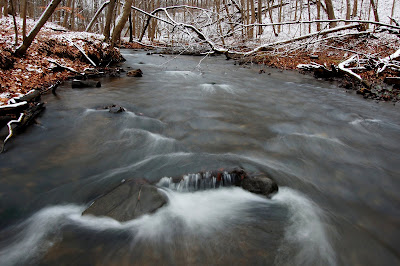 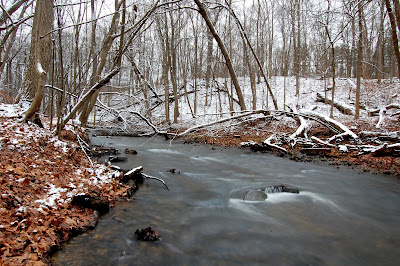 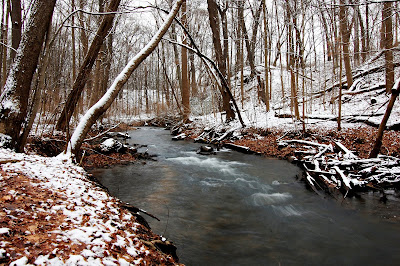 Posted by Keith Board at 9:12 AM No comments:

Good call Nick! It is Oenothera laciniata, Ragged Evening Primrose, a common native plant of bare sandy soil. These leaves seem a bit too large, but basal leaves often are noticeably different, and so are winter leaves. On a side note, I have never even thought about tasting this plant! What does it taste like?
Exploring the dune country of Lake County, Indiana last weekend, I was surprised at the many subtle colors in the winter leaves of this plant. 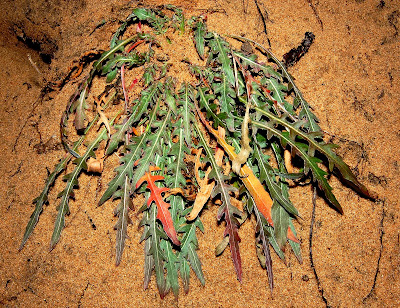