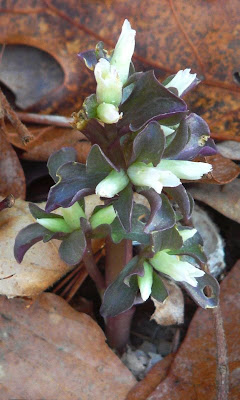 Pennywort
Here is another I flower I encountered while backpacking in TN with which I was unfamiliar. I love etymology; obolos was a small Greek coin.
Posted by ben at 8:43 AM 2 comments:

Email ThisBlogThis!Share to TwitterShare to FacebookShare to Pinterest
Labels: Obolaria 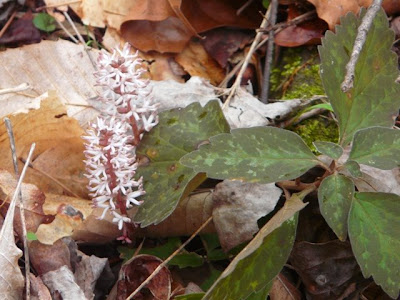 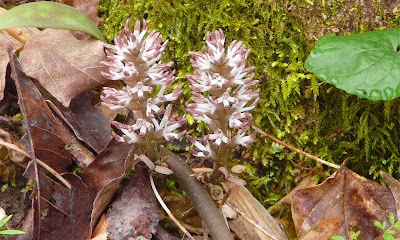 Allegheny Spurge
I went backpacking in Tennessee this past weekend and had a great time seeing wildflowers blooming. I learned a new plant, so I thought that I would share it. Bruce helped me identify the it by photograph. It took me a little bit to associate the leaves with the flowers, since they weren't always together.
Posted by ben at 10:14 AM 2 comments:

Email ThisBlogThis!Share to TwitterShare to FacebookShare to Pinterest
Labels: Pachysandra

One of the most beloved trees of wet forests - Red Maple - is also one of the nicest yard trees we can have, even in uplands. Here are photos from Saturday of pistillate (female) flowers, staminate (male) flowers, and from last October, autumn leaves. Photos from Chamberlain Lake and Ambler Flatwoods nature preserves in northern Indiana. 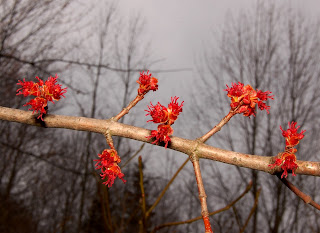 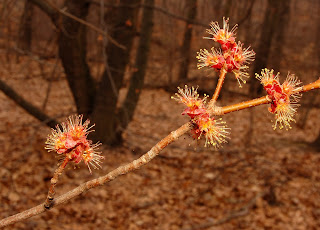 Email ThisBlogThis!Share to TwitterShare to FacebookShare to Pinterest
Labels: Acer

How rare and wonderful when two days of warm, peaceful weather occur on a weekend in March! First, here’s a more cheery look at Erigenia bulbosa to replace the dark and brooding shot I posted earlier. 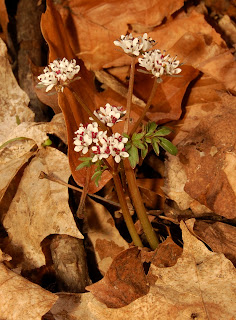 Veronica hederifolia (=V. hederaefolia), Ivy-Leaved Speedwell, was flowering away on a south-facing slope (degraded lawn), near the edge of the parking lot at an abandoned K-Mart in South Bend, Indiana. I’ve found this plant at 7 sites in northern Indiana and southern Michigan, and it is always growing densely and in profusion far and wide. Though attractive, it seems to have the potential of becoming a troublesome weed in natural areas. The setaceous hairs are so numerous that the colonies take on a grey-green appearance from a distance. 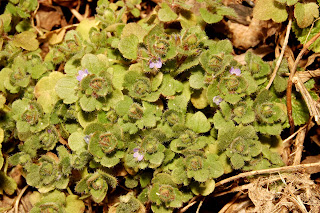 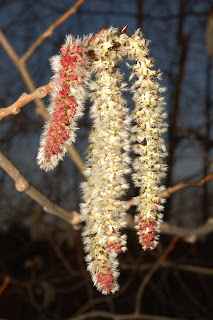 Hepatica americana, Round-Lobed Hepatica, flowering abundantly on the summit of a west-facing slope above the Yellow River in Starke County, Indiana. 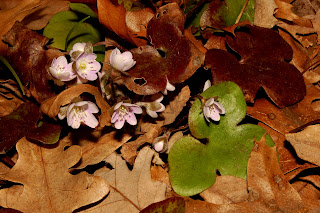 "Shall not a man have his spring as well as the plants?" Henry David Thoreau, journal, June, 1850. 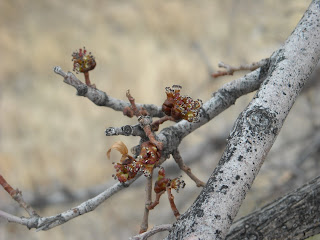 Any thoughts on what this is? One of our wildlife staff took a photo of this tree and called it one thing but one of our plant ecologists disagreed. Then discussion ensued as well as collecting of branches from other trees followed by more discussion. But you all are experts so I'm thinking you can clarify it for us (after laughing at us).

Email ThisBlogThis!Share to TwitterShare to FacebookShare to Pinterest
Labels: Ulmus

Tony Troche, Lindsay, and I were in Missouri last week to spend some time in the herbarium at the Missouri Botanical Garden with Dana and Justin Thomas (and their son Eli). On Friday afternoon, we left the Garden and drove southwest to Salem, Missouri, where we stayed with Justin and Dana for the weekend. On Sunday, Tony, Justin, and I took a botanizing trip to Carman Springs Natural Area. Our target was Claytonia ozarkensis, a plant collected only twice in Missouri, and that has since become extirpated from the state. We knew that it was probably a bit early to find it in flower, but we hoped that since we had seen a few Claytonia virginica in bloom further north, maybe at least the leaves of C. ozarkensis would be visible if the plant was indeed present at Carman Springs. We searched along a creek on the exposed sandstone layers that were sandwiched between dolomite, using binoculars when the terrain was not hikable. While we did see some very interesting plants, including the remains of Carex woodii and Parnassia grandiflora and fresh leaves of Selaginella eclipes and Dodecatheon meadia, we did not locate any C. ozarkensis. Maybe next time.
At one point on our hike along the creek, Justin noticed some yellow-green leaves high on a steep face of a bluff. We couldn't resist climbing up this shallow-soil incline to find out to what species these leaves belonged (we eventually found that they were Dodecatheon meadia leaves). On the way up, we came across Hepatica americana (=H. nobilis var. obtusa) in bloom, and we couldn't resist taking photos. 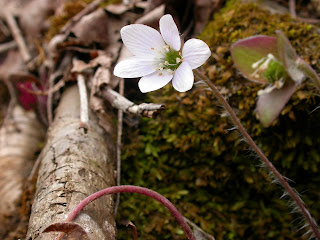 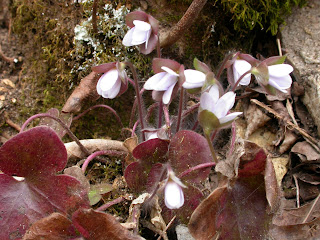 Unfortunately, these photos don't do justice to the incline we were dealing with. This photo of Tony on the slope in an adjacent glade community helps to show the incline, but the area on which the H. americana was growing was even more steep. 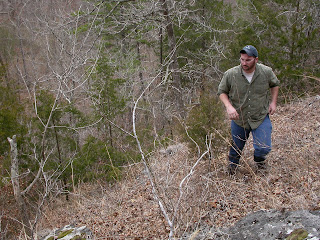 In a glade portion of the bluff, we found Verbena canadensis (=Glandularia canadensis) in bloom. 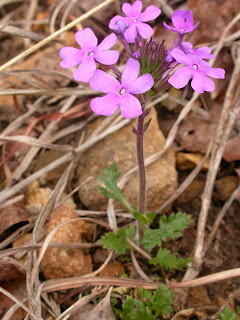 This is just a taste of some of the earliest blooming Ozarkian flora to wet your whistle on this first day of spring.
Posted by Scott Namestnik at 10:57 PM 2 comments: 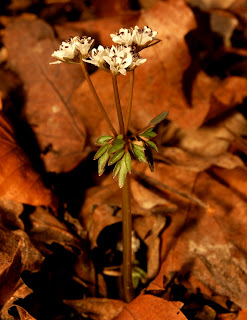 Warm rays of the sun worked their charm on the drab brown of the forest floor, and the delightful little Harbinger of Spring unfurled itself once again - a sign of greener days approaching. Erigenia bulbosa, also known as Salt-and-Pepper, is one of the smaller members of the Carrot/Parsley Family, (Apiaceae, or Umbelliferae). This one was photographed in a lovely Beech forest at Potato Creek State Park, on a gentle south-facing slope, just above a tinkling rivulet on March 16th, 2009. Life is good, and spring is wonderful!
Posted by Keith Board at 5:17 PM 1 comment:

Email ThisBlogThis!Share to TwitterShare to FacebookShare to Pinterest
Labels: Erigenia

I'm guessing we aren't playing the family game this year, but I hope that all of you will continue to post what you're seeing throughout the year here on Get Your Botany On. 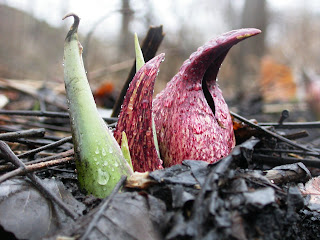 Everyone has probably already seen it, but yesterday at Kankakee Fen in St. Joseph County, Indiana, I saw Symplocarpus foetidus in bloom for the first time this year. The morphology of this species is typical of the family Araceae, with a spathe (a large bract enclosing the inflorescence) enclosing a spadix (a club-shaped structure with a fleshy axis), on which the individual tiny flowers are located. 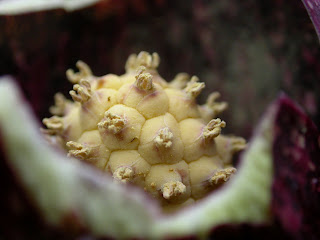 The genus gets its name from the aggregated ovaries (symploce is Greek for connection, and carpos refers to the fruit), while the specific epithet foetidus refers to the foul odor of the plant when bruised. If you were a fly, you would love the skunky odor emitted by good ol' skunk cabbage, and it would draw you to the plant, where you would unknownly collect and spread its pollen. 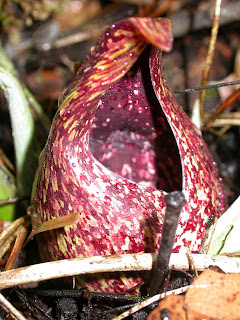 For more information on Symplocarpus foetidus and to read about the other signs of spring I have been observing recently, visit this post on Through Handlens and Binoculars.
Posted by Scott Namestnik at 7:13 PM No comments:

Email ThisBlogThis!Share to TwitterShare to FacebookShare to Pinterest
Labels: Symplocarpus

Yesterday's failed search for signs of spring was a chilly one, but there was beauty in the forest, even so. This is good old Christmas Fern, Polystichum acrostichoides, one of many plants that are green all winter. I enjoyed seeing it embedded in ice, but have to admit I'm ready for a break from ice and snow. These are not DSLR pictures. 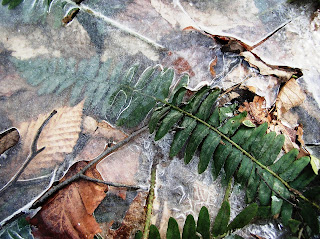 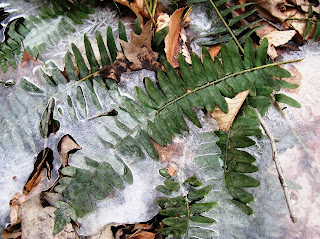