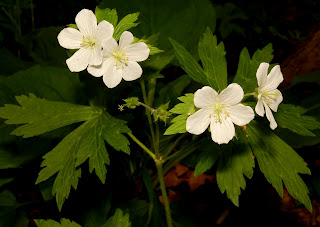 Just for fun, this is Geranium maculatum L. forma albiflorum (Raf.) House. It was photographed in low woods in Porter County, Indiana in 2008. Interesting that one of the flowers has 6 petals.
Posted by Keith Board at 4:34 PM No comments:

Can you spot the deadly predator? 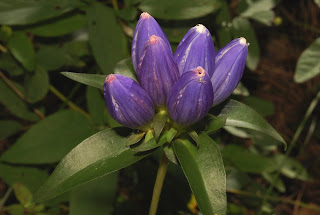 When sorting photos I'm always surprised to notice a detail I hadn't seen in the field. The little spider waits for a bee to land, and it makes me wonder how many Bottle Gentians and other tubular flowers have spiders waiting inside. On a few occasions I have found a tubular flower with a dead bee half in and half out. It doesn't seem like such a tiny spider would have enough venom to bring down a large bee, and that makes me wonder, does a bee ever fly away with a spider latched onto it?

Email ThisBlogThis!Share to TwitterShare to FacebookShare to Pinterest
Labels: Gentiana

Maybe someday we will find a pitcher plant that can trap White-tailed Deer!
Posted by Scott Namestnik at 4:00 PM 1 comment:

Email ThisBlogThis!Share to TwitterShare to FacebookShare to Pinterest
Labels: Nepenthes

The eighth annual botany slide show is rapidly approaching, and in preparation I have been going through photos from our trip to Colorado this July. My slide show will highlight the montane, subalpine, and alpine communities that we saw in central and northcentral Colorado.


Until now, I hadn't posted many of the photos from our trip, as I wasn't sure which photos I was going to include in my slide show and I didn't want to spoil my show for those in attendance. Now that I've picked the photos for my presentation, I will start displaying some of the rejects here and at Through Handlens and Binoculars.

This is Corallorhiza trifida (Yellow Coralroot), a bit past its prime. We saw this saprophytic subalpine orchid along the Missouri Lakes trail at Holy Cross Wilderness.
Corallorhiza trifida is typically self-pollinating. It is circumboreal, found in a variety of habitats including swamps and coniferous, deciduous, and mixed woods.

Corallorhiza striata (Hooded or Striped Coralroot), pictured directly above and below, is an orchid of deep, moist woods.

We stumbled upon this unique orchid at Hanging Lake preserve, which is located along the Continental Divide near Glenwood Springs. It was growing in a mixed woods that had a remarkably eastern feel to it.
Posted by Scott Namestnik at 5:03 PM 5 comments:

The 70 degree temperatures in northern Indiana today were likely our last taste of summer for quite some time. As I walked the trails on our property after work, most of the plant species that I couldn't wait to see flowering just a few short months ago were long gone, dormant until the winter doldrums are once again melted away by vernal verses. Only a few hardy species are still in flower. 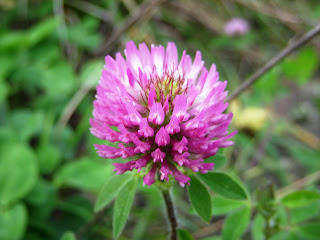 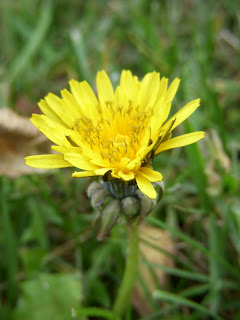 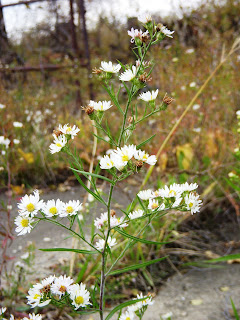 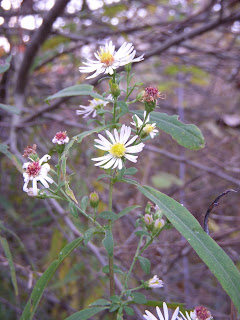 On a related note, Tony told me that today he saw Caltha palustris (Marsh Marigold) in bloom near Logansport, Indiana, four months outside of its flowering time either way you look at it.
Posted by Scott Namestnik at 5:24 PM 1 comment:

The hazards of flash photography! 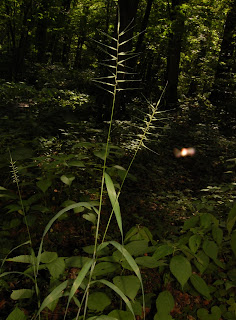 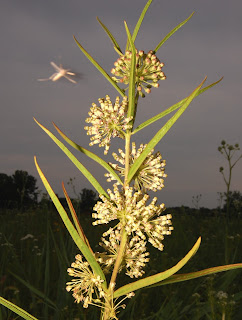 Posted by Keith Board at 8:33 PM No comments:

"Of Woods and Other Things," quotes by Emma Pitcher

I just started re-reading Emma Pitcher’s book, “Of Woods and Other Things” (Beech Leaf Press, Kalamazoo, 1996), and already there are quotes that must be shared. It’s a small collection of essays written for the layman and submitted to a local newspaper in conjunction with The Kalamazoo Nature Center. "Bickie" Pitcher was a renowned naturalist in the Indiana Dunes region before moving to Michigan.

“… the nostalgic, somewhat dreamy whistle of an unseen migrating white-throated sparrow on a misty spring morning, a sound that sets blood a stirring in birdwatchers everywhere.”

“…when the flute-like ee oh lay of the wood thrush sounds through the woods, I drop everything to treasure each crystalline note.”

“One of the most astonishing all-time banding records is that of an Arctic tern found dead on the same Maine island where he had been banded thirty-four years earlier. At 25,000 migratory miles flown in a year, this tern weighing four ounces flew 850,000 in its lifetime.”

“A white-throated sparrow, that bird of haunting, ethereal whistles…”

[Ah, yes, my favorite quote of all time from any author]: "...pale satiny yellow breasts and dark velvety smudges around eyes are apparent." [I'm basking in the beauty of the image this evokes... of Cedar Waxwings].

“In winter, tough, scaly fringes grow on toe edges of the feet of ruffed grouse, serving as unique snow shoes. These drop off in spring…. Like willow ptarmigan, these grouse will spend cold winter nights in a snow bank.”

“A family of barred owls lived near me and one often hooted from the big pine just outside my bedroom window. It was a scary but delightful experience to be wakened by that call of the wild just ten feet from my bed.”

[Re: barred owls]: “Invisible ears are cavities in lower sides of the head covered with loose-ribbed feathers that can spread to form funnels.”

[Re: Ruby-Throated Hummingbird]: “… when a thumb-sized ruby-throated leaves for South America in fall, this wee being makes an extraordinary 500-mile nonstop flight across the Gulf of Mexico from the tip of Florida to the coast of Yucatan. Miracle? Yes.”

[Re: Blue Jays]: “Edward H. Forbush tells of jays not only feeding and guarding an old, partly blind jay, but also leading it to water. Who would have expected compassion from this often aggressive intruder?”

[Re: Black-Capped Chickadees]: In cold weather they become totally round, fluffing feathers to almost twice their normal size, thereby trapping air as insulation. One morning at twenty-five degrees below zero, I saw inflated chickadees covered with hoarfrost crystals, dazzling in the sunlight.”

[Re: Cedar Waxwings]: “Sometimes wing tips contain a bright red wax-like substance visible only at close range. The function of those waxy droplets is unknown.”

The botany section of the book is fast approaching...
Posted by Keith Board at 7:46 PM 3 comments:

While conducting an invasive species survey at Hot Springs National Park in west central Arkansas, I ran into this interesting fern. 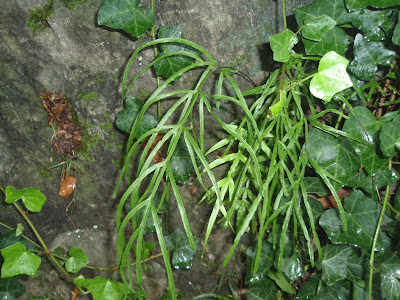 It is called Pteris multifida and it is in the Pteridaceae (Maidenhair Fern Family). Other more familiar genera in the family are Adiantum, Cheilanthes and Pellaea. In Pteris, as other members of the family, the indusia (structures covering the sori) consists of revolute margins. You can see this in the photo of the lower frond surface below. 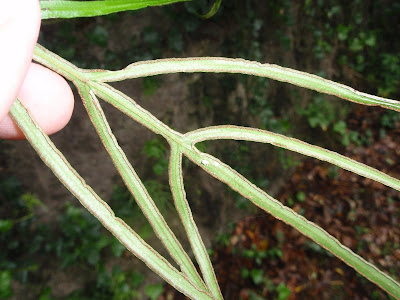 Sadly, this charismatic fern is not native to North America. It is an Asian species that is sold as a cultivated plant. Like many other cultivated plants, it escapes containers and yards and establishes itself in places native plants could potentially colonize. This specimen was growing on a dripping ledge near one of only two uncapped hot springs. There is a large population of Pteris here growing adjacent to a small population of the native Adiantum capillus-verneris. This is symptomatic of the Hot Springs area in general where total habitat alteration and rapidly colonizing invasive species have left little room or hope for naturally functioning ecosystems.
Posted by Justin R. Thomas at 4:11 PM 4 comments:

Email ThisBlogThis!Share to TwitterShare to FacebookShare to Pinterest
Labels: Pteris

While I was finding a decent flowering specimen of Aster linariifolius (Flax-leaved Aster) to take a photo of yesterday at Miller Woods in Lake County, Indiana, "Agrimony" Tony was busy finding the oddest looking species of fungus that I've ever seen.


This is Hericium erinaceus, commonly known as Lion's Mane or Tooth Fungus. Edible when young, this mushroom is said to have the texture of octopus or squid. It is often found on fallen logs from fall into the winter; in this case, it was growing from a wound at the base of a Quercus velutina (Black Oak) tree. Another common name for this species is Old Man's Beard.


This last common name is pretty descriptive, I think. See what you think...


Okay, Justin's beard is more of a flocculose tomentum, but still...

Thanks to Dr. Don Ruch for verification of my identification of this fungus.
Posted by Scott Namestnik at 4:01 PM 4 comments: 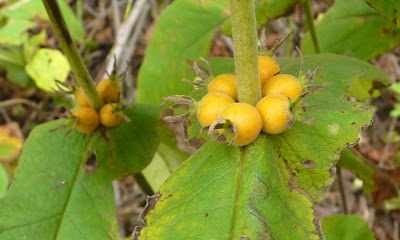 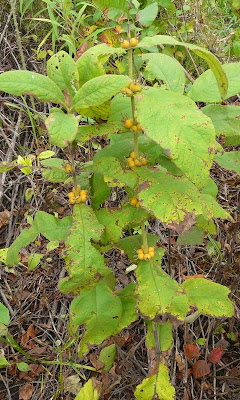 I am pretty sure this is Late Horse Gentian, since all of the leaves were perfoliate. Or as S&W says 'middle leaves pandurate, narrowed below the middle, dialated and clasping-connate at the base.' The fruits were very attractive, with their color and geometric arrangement around the stem. I found these in an open woodland in Henry County, Indiana. Triosteum is an herbaceous member of the Honeysuckle (Caprifoliaceae) family.
Posted by ben at 8:20 AM No comments:

Email ThisBlogThis!Share to TwitterShare to FacebookShare to Pinterest
Labels: Triosteum

Can someone ID this wild beast so I can label the photos correctly? It was in dry Black Oak savannah just above a wet swale in Gary, Indiana. Thanks. Super skinny - about 15 mm in diameter and close to 1 meter in length.. 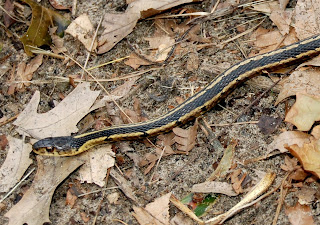 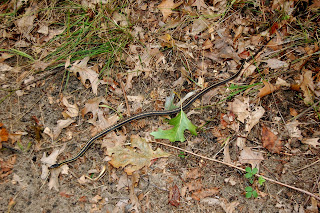 This rather beautiful shrub can be the source of great misery for those who are sensitive to it. The rash and itching are severe...extremely, profoundly severe. If Scott N. finds out you are sensitive to Poison Sumac, he will take you to places where it grows by the hundreds of thousands. And after you limbo and crawl under it for 3 or 4 miles, he'll casually let you know "they have rattlesnakes here."
Poison Sumac - Rhus vernix 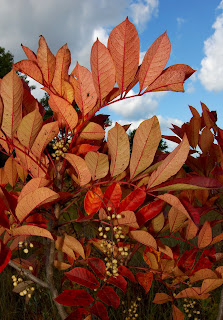 Every now and then one finds a Spiranthes that exhibits "peloria," a phenomenon in which a plant that normally bears irregular flowers mysteriously produces regular flowers. These flowers normally do not open but nearly always develop seed capsules. They seem cleistogamous to me. I have no expertise on this occurrence but would love to hear from anyone who does. The plant in the photo was among a large population of Spiranthes cernua in Lake County, Indiana. Photographed 10-4-09. 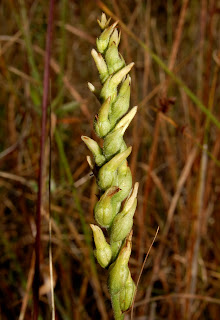 Early to bed... early to rise... certainly applies... to the Buckeyes! Aesculus glabra (Buckeye) is one of the earliest trees to turn color and shed its leaves in the fall, and one of the earliest to leaf out in spring. Its palmate leaves usually bear 5 leaflets. A similar species, Aesculus hippocastanum (Horse Chestnut), native to Eurasia, usually has 7 leaflets. It is cultivated and rarely escapes. Both have leaflets irregularly toothed - as if chewed by a Ferengi.
Buckeye - Aesculus glabra 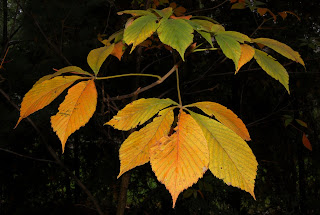 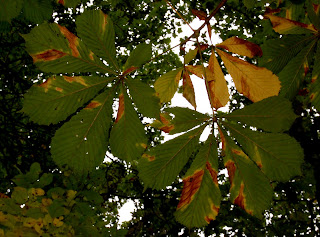 The wood of Buckeye is lightweight and soft, not highly valued for furniture or cabinetry. So, what can you do with light grey Buckeye wood? You can... carve an Eeyore! 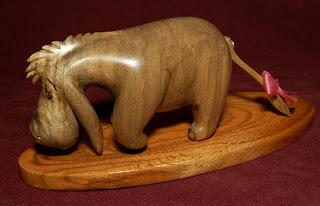