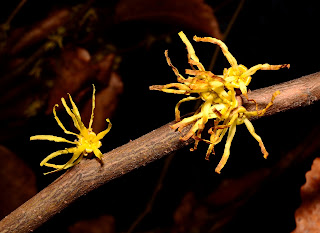 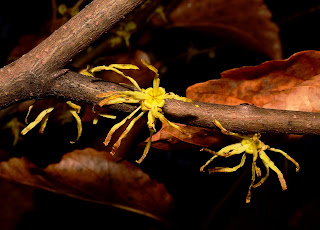 Photographed on October 31, 2012 in Marshall County, Indiana.
Posted by Keith Board at 8:17 PM No comments:

A few weeks ago Parnassia glauca was flowering at a calcareous fen in northern Indiana. The plants were showing drought stress on a slope that normally is seeping but was completely dry on the surface. Their distinctive basal leaves were missing entirely, as were many of their attractive and intriguing associates. 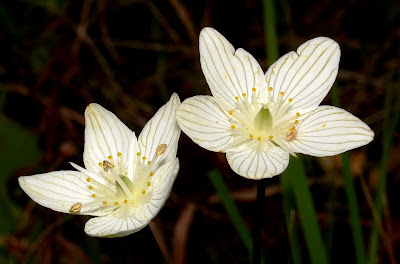 Posted by Keith Board at 7:59 PM No comments:

Email ThisBlogThis!Share to TwitterShare to FacebookShare to Pinterest
Labels: Parnassia

Time for a Plant Quiz - Answered 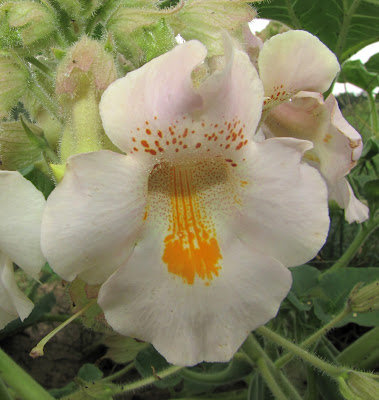 --------------------
Anonymous and The Phytophactor both correctly identified this as the flower of Proboscidea louisianica, formerly known as Martynia louisianica.  This odd, conspicuous species is considered by some to be a member of the family Pedaliaceae (the sesame family) and by others to be in the family Martyniaceae (the unicorn plant family).

I was alerted of the presence of this plant in St. Joseph County, Indiana by a colleague who sent me a couple of photos of an unknown squash-like plant that showed up on the property of a friend of his.  I later found out that the plant was growing at the edge of a tilled vegetable garden.  The landowner, who has lived there many years, has never seen the plant before and did not plant it, at least intentionally.  I have doubts that this is truly a spontaneous occurrence; I wonder if there were seeds of this species accidentally included in the garden vegetable seeds that were installed in the garden.  In Flora of Indiana, Charlie Deam mentions that he once found this species introduced with strawberries that had been seeded in a garden.


In its native range, which seems centered in Texas, New Mexico, Oklahoma, Kansas, and Colorado (but that ranges into scattered counties throughout much of the United States), Proboscidea louisianaca grows along streambanks and in waste areas.   I can't imagine seeing this species growing as part of a natural community.  It was apparently once a part of the native flora in Indiana (along the Ohio and Wabash rivers), but it is now considered extirpated from the state. 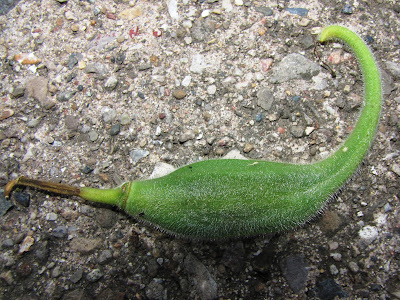 The fruit of Proboscidea louisianica are also quite unique and are the source of the common names Ram's Horn, Unicorn Plant, and Devil's Claw.  This species is sometimes cultivated so that the fruit can be pickled.  As The Phytophactor pointed out, mucilaginous hairs cover Proboscidea louisianica... and all members of the Martyniaceae and Pedaliaceae.
Good call, Anonymous and The Phytophactor!
--------------------
Note: Since posting the answer to this quiz, Kay Yatskievych has let me know that the correct spelling of the epithet for this species is actually "louisiana," making the correct name of this plant Proboscidea louisiana.  In addition, Kay is aware of records in Indiana from Hendricks, Jefferson, Wells, and now St. Joseph counties in Indiana; one of those records is from a weedy area near a bird feeder, so bird food may be another source of the spread of this species.
Posted by Scott Namestnik at 7:30 PM 5 comments: