The 2009 Ohio Botanical Symposium will be held in Columbus on April 3. Jim McCormac has a great write-up about the event here. A link to the official webpage for the event can be found here.

Hope to see some of you in Columbus, Ohio!
Posted by Scott Namestnik at 7:48 PM No comments:

Email ThisBlogThis!Share to TwitterShare to FacebookShare to Pinterest
Labels: Conferences

With the botany sharks that circle this site, it is difficult for a quiz to last long.

Scott is correct. This is Selaginella eclipes. Evidently there is still debate as to whether this species is distinct from S. apoda. I am going with S. eclipes based on the lanceolate leaves of the upper stem surface and their long acuminate tips. I have read that the soil acidity is variable, but FNA does say it is from calcareous habitats.

FNA mentions that there is debate as to the validity of this taxon being a distinct species but then says "It is recognized here at the specific level to highlight the problems within this species complex". Wow! A breath of responsible taxonomy. Too bad they are not consistent in this philosophy.
Posted by Justin R. Thomas at 7:27 PM 5 comments:

Email ThisBlogThis!Share to TwitterShare to FacebookShare to Pinterest
Labels: Selaginella 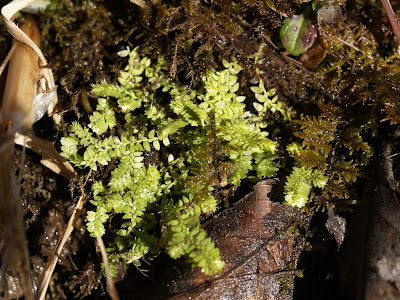 Here is a quick plant quiz. This was growing on a patch of raised ground in an acid seep in Iron County, Missouri.
Posted by Justin R. Thomas at 3:54 PM 1 comment:

Since from the weather reports I've been reading it doesn't seem like spring is coming any time soon to the Midwest, I thought I'd share some photos from my recent trip to San Diego - where spring has definitely arrived. The first set of pictures are from San Elijo Lagoon. San Elijo is one of the few remaining (large) coastal wetlands that have both salt marsh and freshwater marsh habitat types. Riparian scrub and coastal scrub habitats lie adjacent to the marsh habitat. I didn't see much blooming in the marsh habitats yet. Arroyo willow (Salix lasiolepis - Salicaceae) was blooming along the riparian edge of the marsh. Willows in San Diego aren't the identification bane that they were to me in the Midwest. There are only 5 species of Salix in San Diego County and their identification can often be determined using vegetative characteristics. Although when it's not flowering, I feel like mule fat (Baccharis salicifolia - Asteraceae) looks like a willow. I've included a photo of red eye acacia (Acacia cyclops - Fabaceae) just because I'm curious about it's flowers. 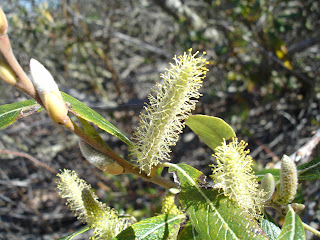 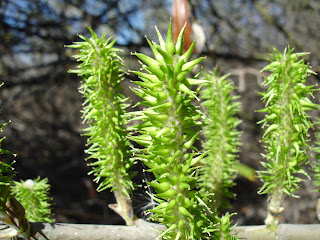 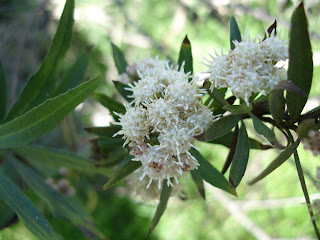 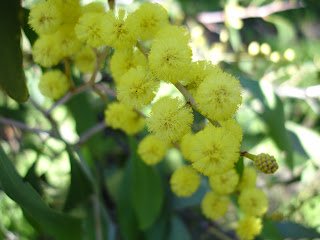 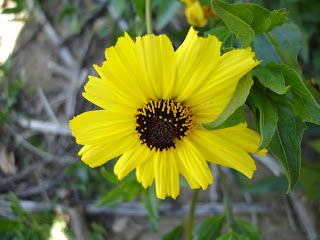 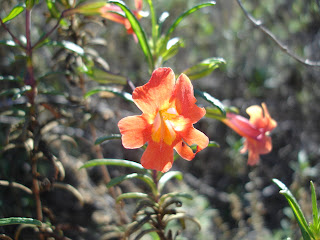 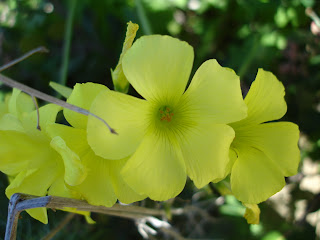 Moving south down the coast, there was a variety of species in bloom at Torrey Pines State Reserve. The reserve is immediately adjacent to the ocean, but sits up on a bluff. The reserve is named for the Torrey pine (Pinus torreyana) which has an extremely limited distribution. Sand verbena (Abronia umbellata - Nyctaginaceae), bush poppy (Dendomecon rigida - Papaveraceae), Shaw's agave (Agave shawii - Agavaceae), and bush rue (Cneoridium dumosum - Rutaceae) were all in bloom during the first week of February when I was there. Several other species were in bloom when I was there, but I limited the post to species I haven't shared with the group before. 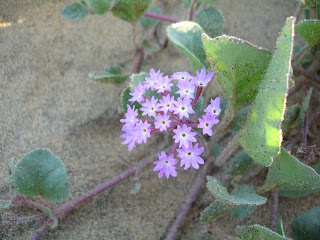 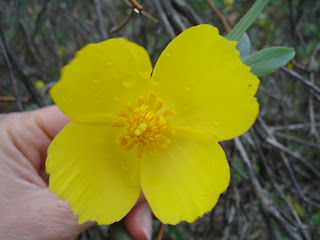 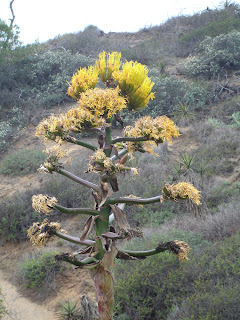 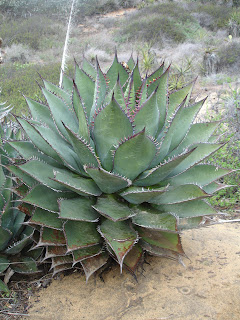 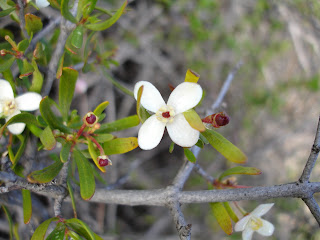 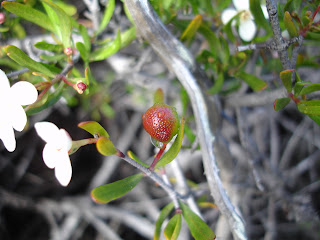 I'll leave you with some really bad pics (luckily, I don't earn my keep taking photographs!). The first is a shot of a faint rainbow over the San Dieguito Lagoon as viewed from the bluffs of Torrey Pines State Reserve. San Dieguito Lagoon is another saltwater/freshwater coastal lagoon that has been preserved (somewhat). The second is the tail of a California grey whale. (Yes, you will need to enlarge the pic.) This was the first time I had ever seen whales in San Diego. Obviously, I didn't see too much of the whale - but exciting nonetheless. 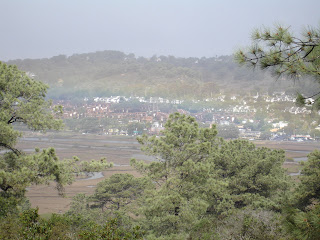 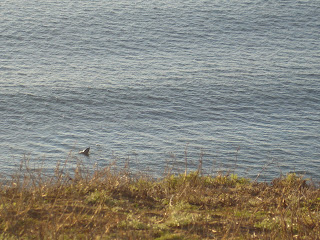 I have some photos from more species in bloom in the chaparral east of the ocean that I will post sometime soon.
Posted by Marianne at 7:14 PM 2 comments:

That's right, Keith... Erodium cicutarium, of the Geraniaceae! The genus name of this cute little weed from Europe comes from the Greek word for heron (erodios), which is in reference to the long beak of the fruit that resembles a heron's bill. Redstem stork's bill, as it is known, is found throughout most of North America in fields, on roadsides, in deserts, and in waste areas. It is also used as a winter forage in the southwestern United States, where it is known as alfileria.

I have never seen this winter annual (biennial in the southern parts of its range) become horribly invasive, but it is invasive in some parts of its range. It was brought to the United States in the 1700s and spread rapidly west across the country as a result of the spiraled mature style that attached seeds to the fur and feathers of animals and birds. By the 1890s, Erodium cicutarium had already made it to the Pacific Northwest, where it dominated overgrazed pastures.

This photograph was taken in March 2006.

I am so tired of seeing that photo of me at the top of the page every time I visit Get Your Botany On! that I'm posting a plant quiz just to post something... anything. Gotta admit, though, I still chuckle when I see that photo.
Here's the quiz. Good luck. 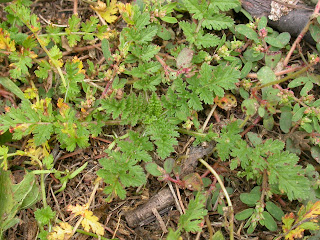 I don't see the resemblance.

By the way, Lindsay and I were at the Wild Things conference in Chicago yesterday. I briefly talked to Jerry Wilhelm (who asked me to pass his regards to Keith, and to tell Keith to keep up the good work). Jerry said that the new Chicago Region flora will be done in 10 years, unless he can get enough funding, in which case it could be done within 3 years. I have a handout regarding making donations. If you're interested in making a donation to speed up the process, let me know, and I will pass you the information you will need.
Posted by Scott Namestnik at 3:42 PM 6 comments: 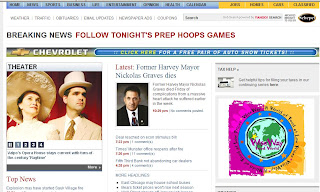 In checking the news from northwest Indiana (nwi.com) today I couldn't help but notice the familiar face on the actor in the top hat. Isn't that a botanist we all know? The only thing missing is the tin vasculum...and handlens...and camera...and binoculars...and copy of Gleason and Cronquist. Apparently a multi-talented guy! p.s. I do not have Photoshop. That really was the picture on the news site!
Posted by Keith Board at 11:06 PM No comments:

I need a little spring!

I'm not one to complain about the snow. I love the snow. I love the winter. But even I have to say that spring can't come quickly enough this year. Parts of LaPorte County were blanketed with almost 2 feet of snow... last night! It's only early February, but it's hard to believe that spring will be roaring in less than two months. Since I don't think I'll be seeing any live flowering plants anytime soon, I figured I would post some old early spring photos to hopefully brighten our spirits.

Behold, the harbinger of spring - Erigenia bulbosa! This photo was taken on March 19, 2005 at Fall Creek Gorge in Attica, Indiana.

Trillium nivale, aptly named snow trillium, as it can sometimes be seen flowering while snow is still on the ground. This photo was taken on March 19, 2005 at Fall Creek Gorge.

The ubiquitous spring beauty, Claytonia virginica. In the depths of winter, even the most common of plants can bring us joy. This photos was taken on April 1, 2006 at Mammoth Cave in Kentucky. 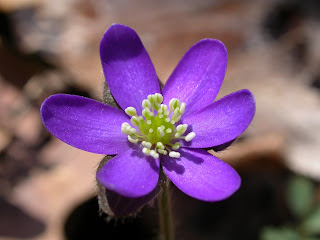 When there isn't much florally happening on the forest floor in early spring, Hepatica acutiloba is at its best. This photo of sharp-lobed hepatica was taken at Dowagiac Woods in southwest Michigan on April 15, 2006. 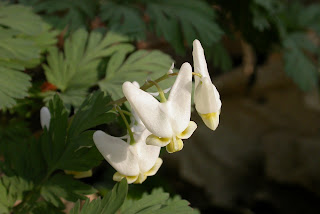 Upside-down, they do look like a Dutchman's breeches, don't they? I took this photo of Dicentra cucullaria at Bendix Woods in South Bend, Indiana on April 10, 2005. 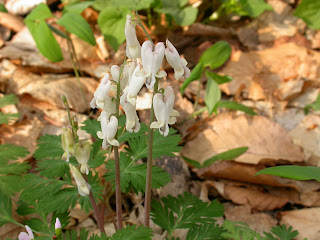 If you've seen the roots of Dicentra canadensis, you understand why it's commonly referred to as squirrel corn. This photo was taken on April 17, 2005 at Bendix Woods.
In mid-April, marsh marigold lights up forested wetlands and seeps. This photo of Caltha palustris was taken in LaPorte County, Indiana on April 19, 2006. 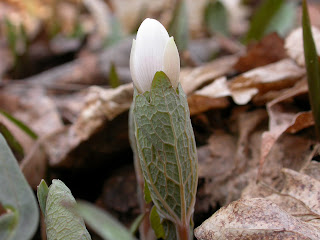 Bloodroot, Sanguinaria canadensis, is beautiful even prior to anthesis. This photo was taken at Waldhaus in Buchanan, Michigan on March 25, 2007. 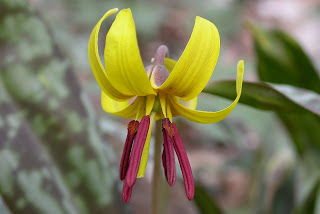 This perennial favorite, yellow trout lily (Erythronium americanum), is about as photogenic as they come. I snapped this shot on April 10, 2005 at Bendix Woods. 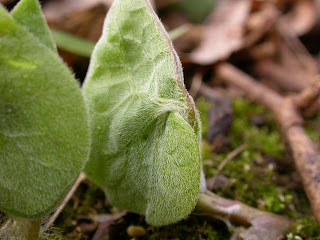 And a final sign of spring, the leaves of Asarum canadense, wild ginger, just beginning to unfurl. I took this photo at the Heron Rookery in Porter County, Indiana on April 1, 2007.

I can't wait for spring!
Posted by Scott Namestnik at 5:53 PM 1 comment: