This photograph was taken in a mitigation wetland in Lake County, Indiana. Has anyone seen anything like this?
Posted by Scott Namestnik at 7:07 PM 1 comment:

Email ThisBlogThis!Share to TwitterShare to FacebookShare to Pinterest
Labels: Penthorum


I will even provide you with a hint on this one... it is not Thismia americana.

Thank you, Anonymous, for ending this excruciating quiz!


Brickellia eupatorioides, commonly known as False Boneset, is a species found throughout much of the United States in prairies and open woodlands of varying soil types. The species has been divided into six varieties, but some botanists do not consider these varieties to be distinct.

Last Saturday I attended an INPAWS field trip to Prophetstown State Park near Lafayette, IN. 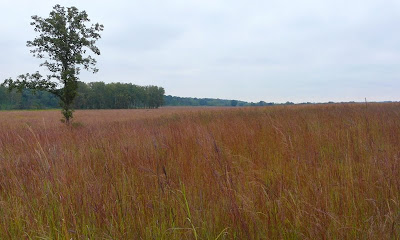 The focus of the field trip was to see the fen, which I had never been to. The park is fairly new and not too far away, so it is worth a visit. Most of the park is restored/planted prairie. The prairie is a little lacking in diversity, but the Big Bluestem was impressive. The fen was to the left of the Sycamore stand in the background. The field trip had a good turnout, despite the sprinkles. I was happy to see a fen. 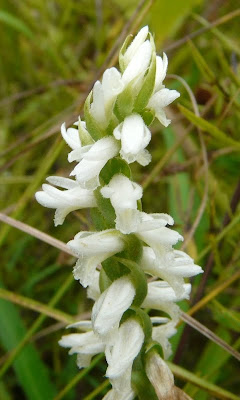 I found this Spiranthes orchid while venturing out to identify a tree. (It turned out to be a Persimmon.) There were several around. I believe that this is Spiranthes cernua, since it has a larger lip, multi-ranked flowers, and nodding flowers. 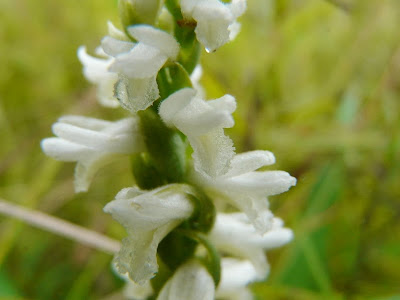 I love close-up views of Spiranthes. This is the same flower as the photo above. The flower was on a stalk that was at least 18 inches. 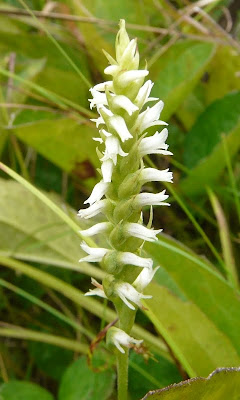 This Spiranthes was in the same fen, but quite a ways from the first orchid. This was near the open marl run that had a lot of wonderful fen species like Grass-of-Parnassus and Purple False Foxglove blooming. I believe that this is Spiranthes ovalis, since it is on a slender stem with small flowers, a lip that is less than 5mm, it wasn't flowering in the spring, it didn't have a green center, and the flowers were arranged in three ranks. 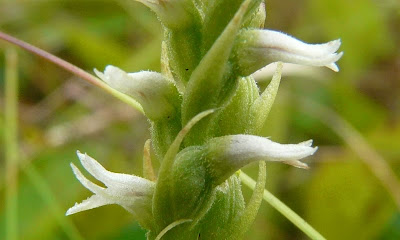 Close-up of the S. ovalis. According to Orchids of Indiana by Homoya, this is primarily a southern Indiana species that occurs further north along the Wabash River. It is supposed to prefer partial shade, which was not the case here, but it was in calcareous soil.
Posted by ben at 4:17 PM 2 comments:

Common in the Midwest, New England Aster is extremely attractive to insects, especially skippers and bees. The larger butterfly is probably a Silver-Spotted Skipper. If anyone could identify the others, that would be wonderful. 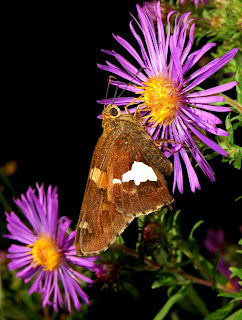 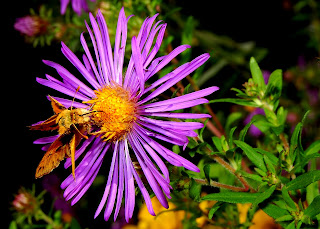 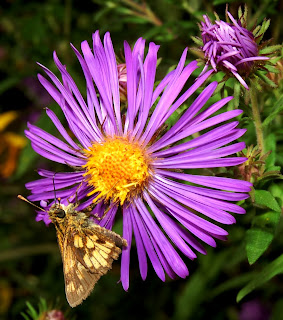 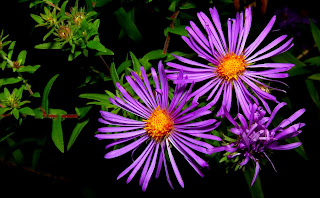 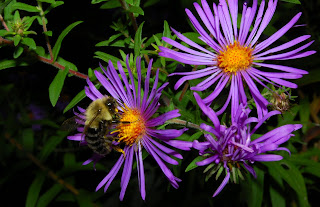 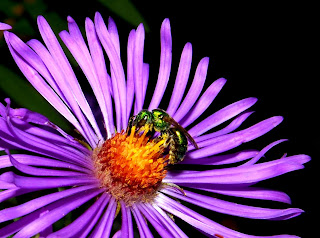 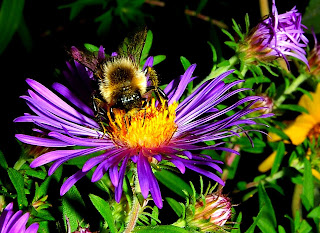 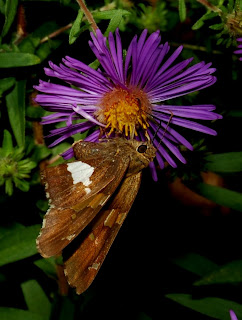 "The delicate tremble of a butterfly’s wings in my hand, the soft petals of violets curling in the cool folds of their leaves or lifting sweetly out of the meadow grass, the clear firm outline of face and limb, the smooth arch of a horse’s neck and the velvety tough of his nose – all these, and a thousand resultant combinations, which take shape in my mind, constitute my world." Helen Keller
Posted by Keith Board at 9:06 PM 2 comments:

Email ThisBlogThis!Share to TwitterShare to FacebookShare to Pinterest
Labels: Aster

Until last week, the only place I had ever seen Aster furcatus (or Eurybia furcata, if you choose to split Aster) was in Warren County, Indiana. I can now add Porter County, Indiana to my list of sites for Forked Aster (or The Forkin' Aster, as I prefer to call it). Unlike many of our state-listed species in Indiana, Aster furcatus is truly a rare plant, known only from Wisconsin, Michigan, Iowa, Missouri, Illinois, and Indiana, and considered a species of conservation concern in all of these states. There are also apparently historic records of the species from Arkansas.


Aster furcatus is considered globally rare or uncommon (G3), and as of 1991, there were less than 50 known populations of this species in existence.


Why is The Forkin' Aster so rare? One explanation could be that it is thought to be self-incompatible. This may be changing, though... more recent research has shown that Aster furcatus is developing self-compatibility, supposedely in response to its existence in small populations.


Another reason why it is so rare may be loss of habitat, in part from succession. Aster furcatus is said to be somewhat shade intolerant. It is a calciphile that is often found on north-facing slopes, along streams, and in seepy areas. It is also found in areas with some disturbance, including along railroads and woodland edges.


As seen in the photograph above, Aster furcatus spreads rhizomatously and forms colonies. This lack of genetic diversity could be yet another reason for its rarity.
Posted by Scott Namestnik at 5:22 PM 4 comments: