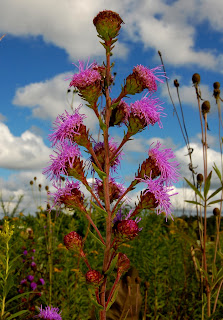 Starting about mid-May, every time I visit a prairie remnant I think, "This is the most beautiful time of the year on the prairie!" Then, I visit a week or two later and think, "No, this is the most beautiful time..." Such was the case yesterday at Cressmoor Prairie in Lake County, Indiana. There were Sunflowers of many kinds, Silphiums in abundance, Goldenrods in profusion, Blazing Stars a plenty, and tall, tall grasses in anthesis! And the varied, colorful, and busy insect life...wow!
Savanna Blazing Star (Liatris scariosa var. nieuwlandii) 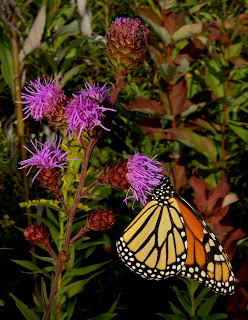 Cressmoor is one of just a few places in northern Indiana where it's easy to see Savanna Blazing Star (Liatris scariosa var. nieuwlandii). It differs from Rough Blazing Star (Liatris aspera) in having middle involucral bracts non-bullate (not puckered, swollen, or blistered) and flowering peduncles as long as- or longer than the involucres. And, while rarely mentioned in manuals, its upper stems and peduncles are often infused with a dark maroon or purple color. 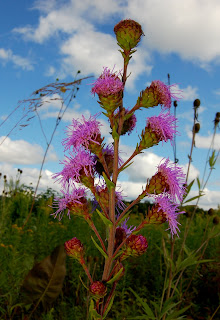 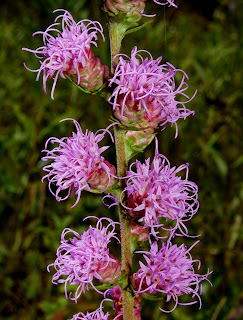 Email ThisBlogThis!Share to TwitterShare to FacebookShare to Pinterest
Labels: Liatris

I was walking our trails last evening when I saw a beautiful Cirsium discolor (Field Thistle) in flower with the moon in the background. I couldn't resist a shot. 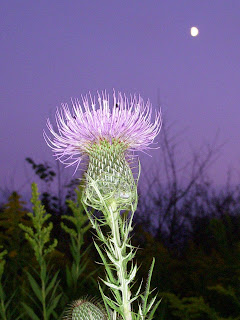 Cirsium discolor is a biennial or short-lived perennial member of the Asteraceae that is native to the eastern half of North America. It occurs in tallgrass prairies, moist meadows, glades, old fields, pastures, and openings in woods, reaching heights of up to 8 feet tall. While it can be found in quality habitats, C. discolor also can withstand quite a bit of degradation. Unlike C. arvense (Canada Thistle), which spreads by rhizomes, C. discolor has a taproot and does not form colonies. The genus name Cirsium comes in part from the Greek word cirsos, meaning "swollen vein," as thistle was once used to treat this ailment. The specific epithet discolor is a reference to the leaves being different colors (green on the top and densely white hairy on the underside).
Posted by Scott Namestnik at 8:53 PM 4 comments:

Email ThisBlogThis!Share to TwitterShare to FacebookShare to Pinterest
Labels: Cirsium

Just in case you need another five minute distraction, here is an interesting article on fall leaf color, sent to me by Marianne...

Email ThisBlogThis!Share to TwitterShare to FacebookShare to Pinterest
Labels: Articles

These beauties were blooming at McCormick's Creek State Park, near Spencer, Indiana. This was the first time I had seen these orchids. It was worth going back to get my camera.
Nodding Pogonia or Three-birds Orchid 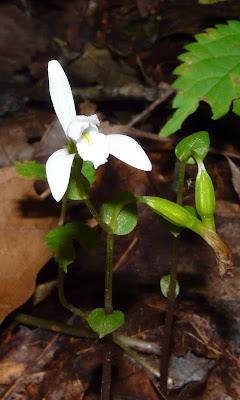 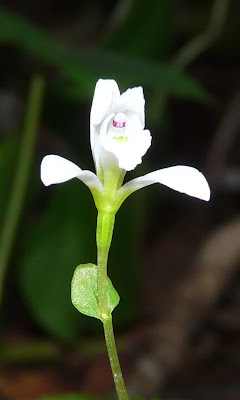 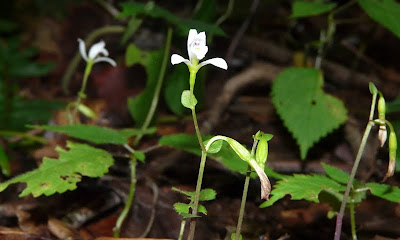 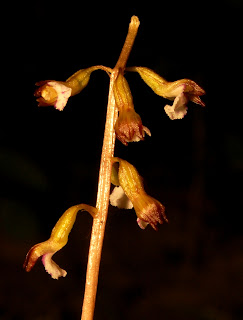 This strange and interesting little saprophytic orchid is occasional on trail edges in the Indiana Dunes region. Especially at home in oak woods with deep humus, it tends to frequent the same places as other saprophytes: Spotted Coralroot Orchid (Corallorhiza maculata), Indian Pipe (Monotropa uniflora), and Pinesap (Monotropa hypopithys).

The plant in the photo is somewhat unusual in having its flowers open with a well-developed lip. They are often cleistogamous - that is, unopened and self-fertilizing. Some suggest they may even set seed without fertilization (google the terms “apomixis” and “apogamy”).

Coralroots have rhizomes (underground stems), but would you believe this plant has no roots? Like other saprophytes, it releases digestive enzymes into the surrounding humus, then absorbs the products of this “external digestion.” Strange…and wonderful!

Photographed at Sebert Woods in LaPorte County, August 13, 2009.
Posted by Keith Board at 6:45 PM No comments: 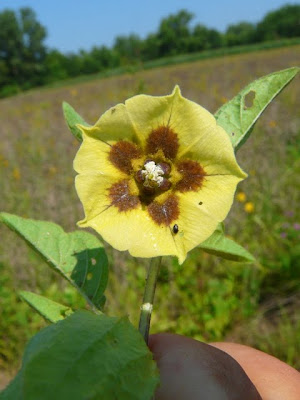 These pretty flowers are not too far above the ground and they face down. I do not get to see them much, even though it is a common weed/flower.
Posted by ben at 12:39 PM 2 comments:

Email ThisBlogThis!Share to TwitterShare to FacebookShare to Pinterest
Labels: Physalis

Congratulations to Keith, who correctly named the quiz plant from a few days ago as Abutilon theophrasti, and to Justin, who hinted at one of its common names (Velvetleaf). Some of the other common names for this species include Butterprint (as Keith noted), Indian Mallow (a reference to its family and country of origin), Buttonweed (a reference to the shape of the fruit), Pie-marker (likely another reference to the fruit shape), and China Jute (a reference to its use as a fiber). Abutilon theophrasti is a weed in North America, found in every state except Alaska and Hawaii, as well as in the southern tier of Canadian provinces. 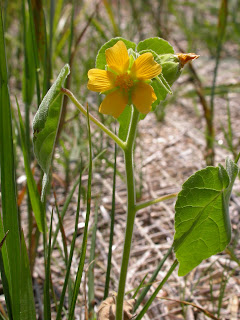 Abutilon is an Arabic word meaning mallow-like plant, while the specific epithet, theophrasti (or theophrastii) is a reference to the Greek philosopher and botansist Theophrastus. Velvetleaf is a member of the Malvaceae (mallow family), a family of plants that I have enjoyed since I first learned the plant Hibiscus rosa-sinensis (Shoeblackplant) in the Bahamas when I was in college. The flowers of Abutilon theophrasti have that same characteristic mallow look, with a column of united filaments with numerous stamens. I'd never spent much time looking at the flowers of this species before, as I usually recognize it by its velvety, heart-shaped leaves, and don't give it a second glance. 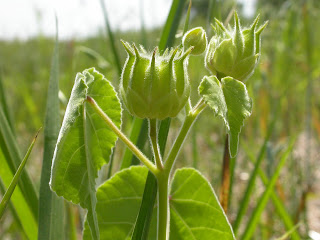 Above is a photograph showing the characteristic fruit of Abutilon theophrasti. This annual species can be a serious weed in agricultural fields, leading to substantial decreases in crop yields and costing hundreds of millions of dollars in control efforts.
Posted by Scott Namestnik at 8:15 PM No comments:

Email ThisBlogThis!Share to TwitterShare to FacebookShare to Pinterest
Labels: Abutilon 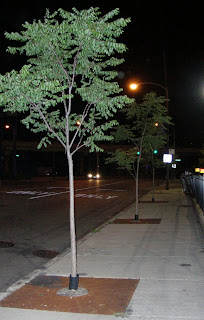 Good call, Justin and Tom. It is Gymnocladus dioica, and almost certainly a cultivar (cultivated variety). The leaflets are smaller than the typical species. There is also a Gymnocladus chinensis used in landscaping, but it normally has many more pairs of leaflets and the leaflets are more narrow.
In northern Indiana, Kentucky Coffee Tree is occasional in rich mesic forests and bottomland forests along streams. It is not common here. The large, distinctive bean pods fall off in spring and are gathered by wildlife. They bear a rich, pleasant coffee-like smell. It would be interesting to know how they were used by Native Americans and European settlers. Folklore mentions a coffee-like drink, and I'm confident there were other uses. The seeds are extremely hard and spend several years in the soil before germination. However, if scarified they sprout readily.
The lumber has fantastically beautiful grain similar to White Ash, and is used in cabinetmaking. Lumbermen and cabinetmakers call it "Coffee Nut."
During drought, the leaflets turn their edges toward the sun. This may be the only tree in Indiana with bipinnate leaves.
Posted by Keith Board at 8:39 AM 1 comment:

Email ThisBlogThis!Share to TwitterShare to FacebookShare to Pinterest
Labels: Gymnocladus

While driving in Chicago recently I was surprised to see this type of tree used in street planting. Can you identify it from the bark alone? 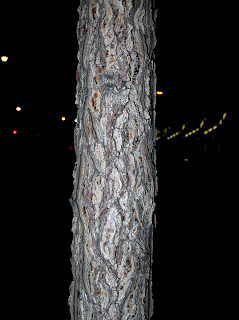 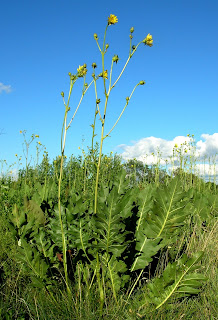 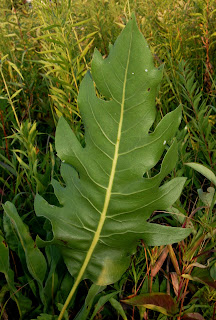 Some believe this is a hybrid of Prairie Dock (Silphium terebinthinaceum) and Compass Plant (Silphium laciniatum). Others feel it is a variety of Prairie Dock as treated by Fernald: Silphium terebinthinaceum var. pinnatifidum. Still others treat it as a distinct species: Silphium pinnatifidum. Online reading seems to indicate further research is necessary. Photographed at Cressmoor Prairie Nature Preserve in Hobart, Indiana on August 14, 2009.

Email ThisBlogThis!Share to TwitterShare to FacebookShare to Pinterest
Labels: Silphium

Dark green and super shiny all year, this plant is one of many that are easier to find in winter. Unlike other club mosses in Indiana, it does not produce a strobilus (cone-like structure bearing sporangia). Instead, sporangia are borne in leaf axils along the stem. Another interesting variation is its production of gemmae - little vegetative propagules that fall off, take root, and produce new plants. Shining Club Moss grows in high quality swamp forests on mossy hummocks, and occasionally on slopes in mesophytic woods. Photos from a steep, riparian slope at Warren Woods in Berrien County, Michigan. 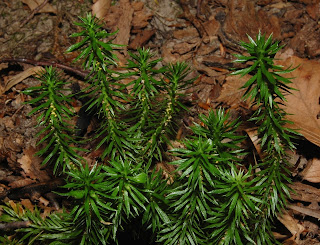 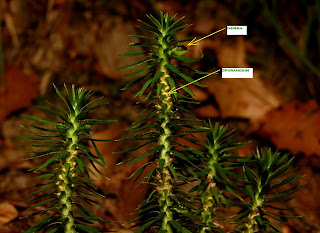 Posted by Keith Board at 9:34 AM No comments:

Certain to be an easy one, but here's another plant quiz... 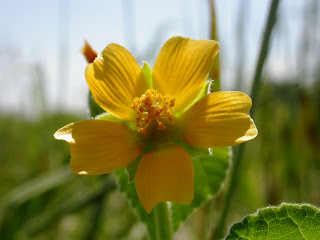 "Reviving the Lost Art of Naming the World"

Dana recently sent me this most interesting article:

It is well worth reading.
Posted by Justin R. Thomas at 3:59 PM 4 comments:

Email ThisBlogThis!Share to TwitterShare to FacebookShare to Pinterest
Labels: Articles

Since we've recently been on the topic of geraniums with white flowers, I thought I would post a couple of photos of Geranium richardsonii (Richardson's Geranium), a species that we saw flowering near Avon, Colorado a few weeks ago. Within North America, Geranium richardsonii is found from the Northwest Territories south to New Mexico, and west to the Pacific Ocean.


This species is found at a range of altitudes in montane and subalpine forests dominated by spruce or aspen, as well as in meadows. It was named in honor of the 19th century surgeon and naturalist John Richardson.

Posted by Scott Namestnik at 5:04 PM No comments:

This plant quiz is unrelated to the previous quizzes. In fact, it would be more accurate to call it an unknown. I plan to spend more time researching it, but right now it is still a mystery. Any help is appreciated. The leaves are opposite, uniform, and deeply three-lobed. Habitat - forested floodplain. Location, Wayne County, Indiana, near Richmond. Habit - creeping to semi-erect plant. 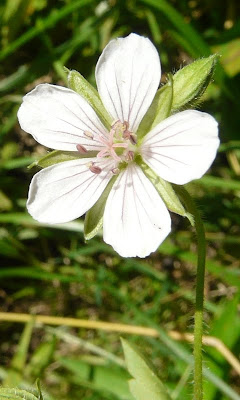 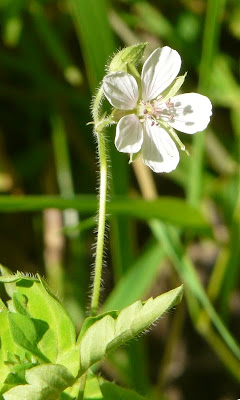 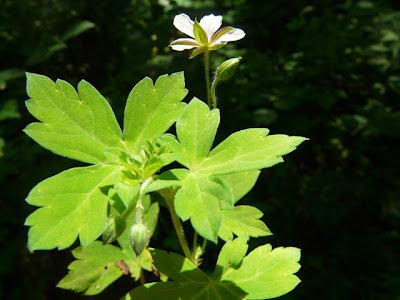 At Merry Lea Environmetal Center last weekend, I saw one of the largest individuals of Arisaema triphyllum that I've ever seen. Here's a photo, with an old man hat for scale...

Email ThisBlogThis!Share to TwitterShare to FacebookShare to Pinterest
Labels: Arisaema

One of the plants that I wanted to see while in Colorado was Asclepias speciosa. While this native species is nothing more than a roadside weed around Boulder, it is certainly worthy of its common name, Showy Milkweed, as you will see below.


One reason why I wanted to see this species is because it is known from the Chicago Region, along a few railroad tracks, where it is considered introduced. I wanted to make sure that if I ever ran into it, I wouldn't confuse it for Asclepias syriaca. No way. Look at those hoods! They're enormous - over a centimeter long, in fact. In milkweeds, the hoods are the parts of the flower that arch upwards. The corolla lobes are reflexed. The horns are the incurved appendages coming out of the hoods.

In Asclepias speciosa, the pedicels, peduncles, backs of the corolla lobes, and the upper stems are densely white hairy, another character than can be used to distinguish between this and similar species.
Asclepias speciosa is found throughout the western half of the United States, as well as in Minnesota and a few counties in Iowa, Wisconsin, Illinois, and Michigan. It is typically a grassland species, but can also be found in riparian areas and in savannas with small trees.
Posted by Scott Namestnik at 8:57 PM 3 comments: