Some of you know that I spend a lot of time on beautiful rivers in “the land of sky blue water,” northern Wisconsin. 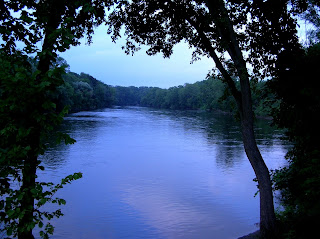 When I see a river purling beside me I always wonder where it’s going, and where it comes from. 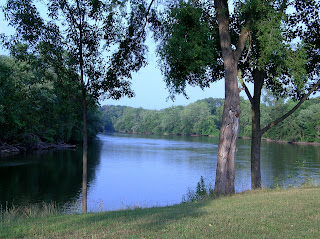 I wonder what kinds of fish live in it, and what wonderful plants grow on its islands and forested slopes. 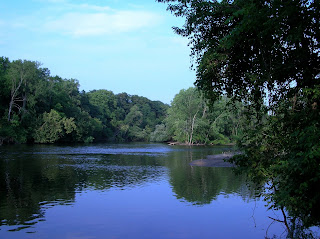 I wonder what it looked like when the early Frenchmen plied its waters. Did the Indians travel this water? Did they fish here and leave arrowheads and spearpoints on the bottom? 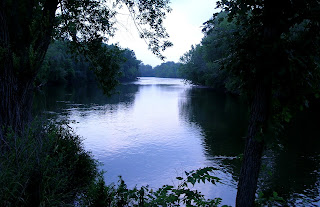 Now I must admit that I’ve been misleading. While the statements are true, the photos are not from the northwoods at all (I never said they were!). You may have noticed the absence of birch, white pine, balsam fir and other favorites of the north country. The photos were taken within the city limits of South Bend, Indiana, along the St. Joseph River. No kidding. They’re just snapshots from a point and shoot camera which rarely records the color of the sky correctly. 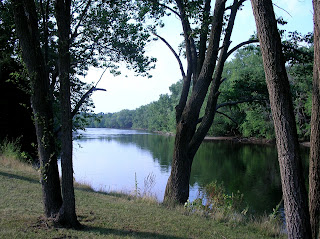 The city recently completed a multi-use path that follows the west side of the river from Darden Road all the way to Angela Drive. The opposite shoreline is mostly undeveloped – part of it is an Izaac Walton preserve, and most belongs to St. Mary’s College. The city plans to extend the path soon and connect with Mishawaka’s Riverwalk. 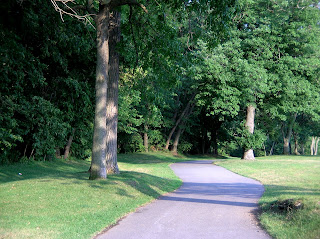 Projects like this enhance the quality of life for city dwellers and anyone who visits. Many people use the path for walking, jogging and biking, and it’s common to see canoes, kayaks, and fishing boats going about their merry way on the river. Occasional fishermen (and women) try their luck along the shore. Admittedly, the river is not pristine and pure along this stretch after passing through Elkhart and Mishawaka, and carrying away their (treated) effluent. Even so, the city officials of South Bend and Mishawaka are to be commended for making an effort to improve the quality of life for everyone by making it easier to get outside and get active in a scenic place. The views of the river are surprisingly nice, and they make one wonder if it looked much different in the days of LaSalle, Coquillard, and Navarre. 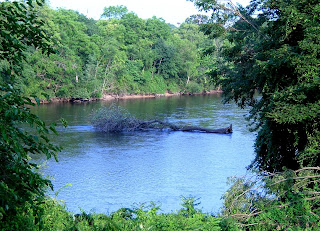 Finally, since this is a botany blog, here’s a grass that was growing along the path. It has a distinctive look, even before flowering. Can you name it? 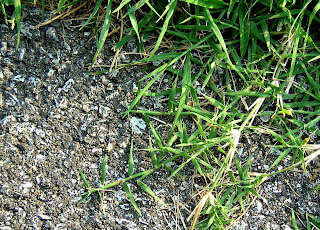 Nice to be visiting your blog and nice pictures also...keep it up!

Looks like the grass I saw in lawn in Florida last month. I haven't looked hard, but could be Zoysia.

Nope, not Zoysia. Here's a clue - it is both rhizomatous and stoloniferous!

Seems like whenever I notice it, it's growing out onto the pavement just like in this picture.

Man, I need to get out of the office and away from these data sheets and back in the field. I'm not doing too well on grass quizzes lately...

Cynodon dactylon was my other initial thought, as Anonymous has posted. However, I didn't see the distinctive long hairs on the collars that I thought would be visible in your photo.

Good call, Scott and Anonymous. It is Bermuda Grass, Cynodon dactylon, a native of Africa that is used for lawns in much of the southern US. It is also used for lawns frequently in the cities of South Bend and Michigan City, Indiana. In South Bend it is literally all over the place - lawns, vacant lots, and especially in the sand country west of the city. It has a digitate inflorescence much like Digitaria, but the spikes are smaller, earlier, and more delicate. I'll post more photos when time allows.

For what it's worth, I also thought that was Zoysia japonica. The lack of hairs, the constricted and pale collar region and the overall coloration of the blades and rhizomes. Go figure.

Don't congratulate me... I got it wrong! Congratulations to Anonymous!