It's A Purple Platanthera Party...

On Thursday morning, on a tip from Derek Nimetz of Indiana Department of Natural Resources - Division of Nature Preserves, Tony and I swung by a site in Lake County, Indiana to find Platanthera psycodes, Small Purple Fringed-Orchid, in bloom. We certainly were not disappointed! 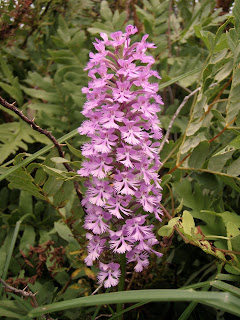 Then, on Saturday afternoon at the Goose Pond Biodiversity Survey in Greene County, Indiana, on a tip from Kirk Roth, I had the opportunity to see the other purple Platanthera in Indiana, Platanthera peramoena, Purple Fringeless-Orchid. (For more information on the results of the Goose Pond Biodiversity Survey, visit my blog entry at Through Handlens and Binoculars.)


It is difficult to argue the attractiveness of either of these purple beauties. Although both are found in Indiana, Platanthera psycodes is found primarily in the northern tier of counties, whereas Platanthera peramoena primarily inhabits counties in the southern half of the state. The habitat in which these two similar looking species grow is also quite different. As Keith pointed out in his post about a year ago, P. psycodes is found in forested seep wetlands, along springy streams, in wet prairies, and in bogs; in Indiana, it nearly always is associated with groundwater-fed wetlands. Conversely, P. peramoena grows most commonly in floodplains and uplands, though it can sometimes be found along ditches, ponds, or lakes. When found in forested areas, as it sometimes is, the plants are spindly and the flowers are a paler color. However, it is often found looking very healthy in open areas that have resulted from disturbance.

These two purple Platanthera are sometimes confused for one another, but if habitat and location weren't enough, taking a close look at the flowers can quickly provide a correct identification. 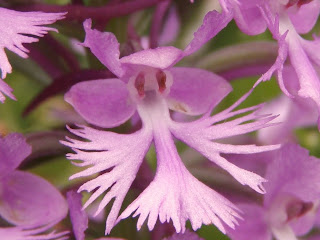 The photograph above shows the flower of Small Purple Fringed-Orchid; by looking at the lip, you can see where it gets its name. In addition, psycodes means "butterfly," apparently a reference to the shape of the flowers.


The photograph above shows the flower of Purple Fringeless-Orchid. It kind of looks like some loving Saturday morning cartoon character, doesn't it? Although the lip can be erose in this species, it is not fringed as in Platanthera psycodes. Coincidentally, peramoena means "very loving," referring to the beautiful inflorescense.

I hope you've enjoyed this brief Purple Platanthera Party. If you haven't had enough, get out there and find them for yourself! Photographs do not do justice to the elegance of these species.

Email ThisBlogThis!Share to TwitterShare to FacebookShare to Pinterest
Labels: Platanthera

I think Barney the dinosaur should be invited to this party.

Wow, Lythrum salicaria looks like an orchid after it gets photoshopped.

Actually, very nice plants, nice post, and excellent photos, Scott! I've always wanted to sit by a Platanthera at dusk and see what kind of moths show up.

Thanks Justin and Keith. I might have seen more Platanthera peramoena while driving... I saw what I thought was Phlox paniculata along the road and didn't stop. Had I read the info in Orchids of Indiana before hand, saying that the two are sometimes confused from a distance and that they are common associates, I would have checked it out.