Having photographed all but one of Indiana's 41 native orchid taxa with known populations I have moved on to locating and photographing six others thought to be extirpated from the state, but still present in surrounding states.

Arethusa bulbosa has been high on my list of most wanted species. The last known plant in Indiana was photographed in a bog in Kosciusko County in 1983, and was not found subsequently. Prior to that it had been 50 years since the last sighting. (Homoya 1993).

I recently learned of a sphagnum bog less than a three hour drive into Michigan where this species can still be located, and on short notice, following a tip that it was in bloom, my wife, Nila, and I headed there early one morning a few days ago.

We found five plants along a short stretch of boardwalk leading out into the bog. One stem was bent at the base and was resting on the ground, and one had a drooping sepal hanging askew. Another was growing directly beneath a very small tamarack tree (Larix laricina) and offered no place to position a tripod. From the remaining two I chose the one that was about five feet from the boardwalk and pretty much in an open setting.

I was surprised at how small the orchids were--no more than six inches tall. This meant that my camera needed to be very close to the ground and about 12 inches away from the flower. I carefully stepped off the boardwalk onto the sphagnum moss hoping not to leave indelible footprints in this very fragile habitat, and wondering with each advancing step, against all reason, if I was going to break through the sphagnum mat into deep water.

Luckily I had purchased a right angle finder the week before which, when attached to the camera's viewfinder allowed me to focus and frame the orchid without having to lie flat on the ground. Even so, the footing was very tenuous and I ended up with far fewer photos than I normally take.

Surprisingly, the sphagnum moss recovered quickly. There was no sign of my footprints when I left, although my boots had been submerged in about four inches of water while I was working. 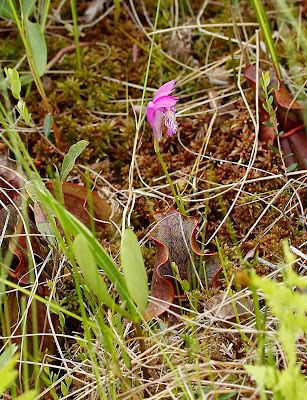 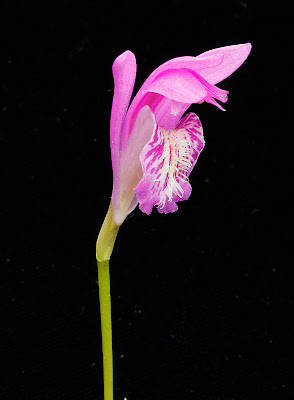 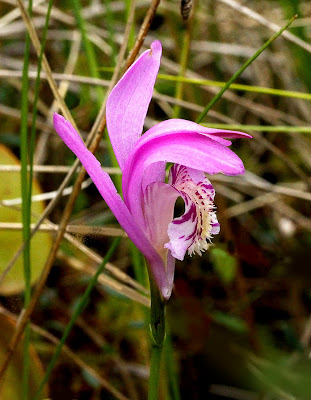 Email ThisBlogThis!Share to TwitterShare to FacebookShare to Pinterest
Labels: Arethusa

Great post! I spent several hours yesterday trudging around a northeastern Ohio bog which is the last remaining location for the Arethusa in our state. I didn't have any luck, perhaps I was too late this year or I just didn't notice it amongst the taller, more dense vegetation.

Thanks A.L.,
Bog trotting is not easy is it? I hope it reappears for you next year.

Very nice Pete! The bottom photo is the very best I've ever seen of Arethusa. I hope to see this stunning plant someday.

Wouldn't it be nice to find it in Indiana after a 30 year absence?