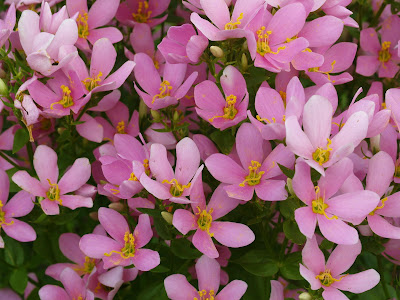 Sabatia angularis plants in Indiana and southern Michigan this year were the most floriferous I have ever seen. They looked like your photo, Justin. I was hoping someone would post a Rose Pink. Nice photo indeed!

Thanks, Keith! It is funny that you mention a bumper bloom this year in your area. Most of Missouri was painted pink with this species LAST year. This year, they were few and far between. Ebb and flow, indeed.

Come to think of it, we were pinked out with Sabatia the last two years. I've always found it strange that this plant flourishes in two seemingly opposite habitats: wet acid sand and bone dry, non-sandy prairie remnants, which I guess are alkaline. Where does it grow in the Ozarks?

I haven't noticed much correlation with soil chemistry here in MO. That doesn't mean there isn't one, however. I tend to think of it as an old field species that you often see in prairies and glades in less significant numbers.