Many people would look at the two photographs below and call both plants Virginia Creeper or Woodbine, Parthenocissus quinquefolia, without as much as a second thought. But let's take a closer look. Below, I will explain how these two plants can be morphologically separated into two distinct species. 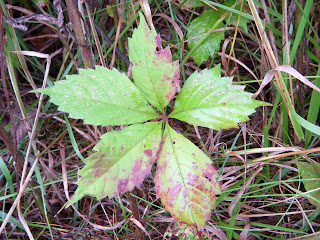 The plant in the photograph above is Parthenocissus quinquefolia, while that in the photograph below is P. inserta (which is treated as a synonym of P. vitacea by some authors, though the nomenclature of these two is quite confusing). 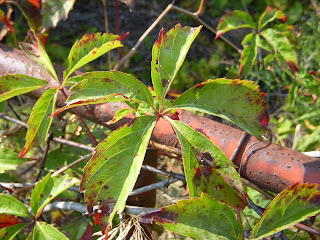 One thing to notice is that the leaflets of P. inserta are more shiny above than those of P. quinquefolia, which often appear dull on the upper surface. 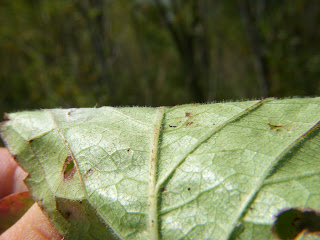 Looking at the undersides of the leaflets, those of P. quinquefolia (above) are almost always pubescent, while those of P. inserta (below) are more often glabrous. There is, however, a rare hirtellous form of P. inserta known as P. inserta f. dubia. 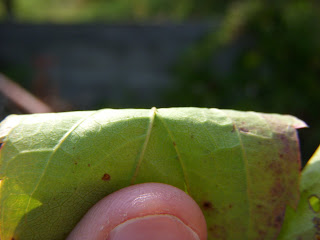 Another part of the plant to check is the junction of the petiolules with the petiole. 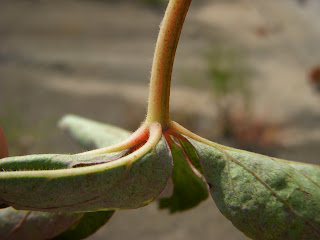 In P. quinquefolia (above), this junction is also pubescent; in P. inserta (below), the junction is glabrous. 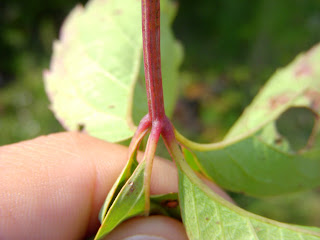 Growth habit is yet another way to distinguish between these two similar species. 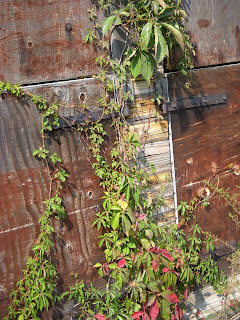 Parthenocissus quinquefolia (above) is often high climbing, but it can also be found growing at ground level. Parthenocissus inserta (below), however, sprawls over the ground, structures, or other vegetation. 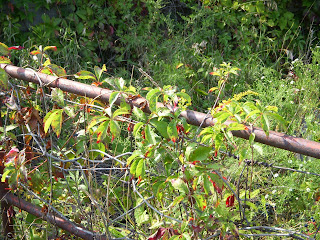 The reason for this difference in habit is all in the tendrils... 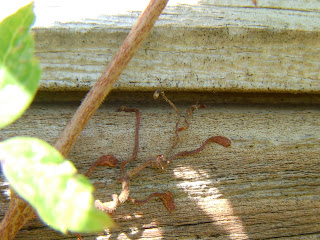 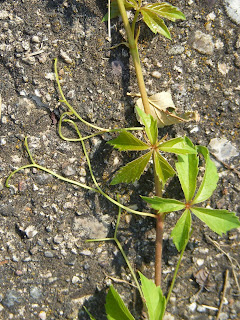 Finally, if you are lucky enough to have flowers or fruit, the distinction between these two species is simple. However, as Swink and Wilhelm point out in Plants of the Chicago Region, P. quinquefolia rarely produces fruit, while P. inserta produces fruit routinely. 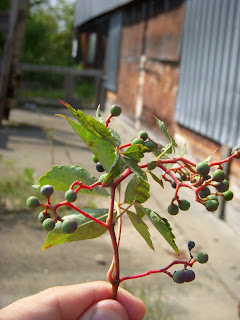 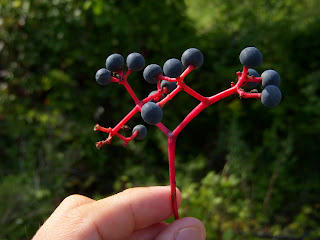 It's as easy as that. There is no longer an excuse for lumping all members of the Vitaceae with five palmate leaflets into P. quinquefolia. Now that you can distinguish between mature plants of Parthenocissus, be sure to check The Vasculum to see how to determine the difference between Parthenocissus and Vitis in the cotyledon stage.
Posted by Scott Namestnik at 1:00 PM

Email ThisBlogThis!Share to TwitterShare to FacebookShare to Pinterest
Labels: Parthenocissus

Wow, who needs a text book with Scott and Justin around? Excellent post, Scott, and excellent photos!

Thanks Keith. Glad you enjoyed the post and photos. It is helpful that both species are on our property so I can study them closely.

Sweet post, Scotellaria. I hadn't seen verifiable P. inserta until my trip to the dunes last spring. It is nice to see the characters so well explained.

Thanks Justin. That was also the first time I had felt good about calling it P. inserta, other than right along railroad tracks. Possibly the first time I have ever seen P. quinquefolia in fruit was when I took the photos for this post... that's part of what prompted me to post on this topic.

This post is probably too buried to comment on, but I just check USDA Plants Database and found that P. inserta is considered a synonym of P. quinquefolia. So that means it no longer exists and this post is moot (wrote in the tone of sarcasm).

I'd be interested to know where they are getting their information. They seem to be using the name P. vitacea for the entity I called P. inserta in my post. Several of my resources show these two to be synonyms. However, nowhere can I find a resource (other than the USDA database) that shows P. quinquefolia and P. inserta as synonyms. The USDA database shows both P. quinquefolia and P. vitacea in northern Indiana, so I'm pretty certain that they are recognizing what I am calling P. inserta (as P. vitacea). Of course, vPlants is down, so I can't see how they are currently handling these species.

Wow Nicole... I had no idea that my discussion on Parthenocissus would get you that excited...

Hilarious! To each their own.

Hello, I do not agree with the previous commentator - not so simple

Interesting observations... thanks for sharing these. I'll watch for these characteristics.

Thank you! This post is very helpful, this information isn't available anywhere else online, at least not in detail. It turns out my little red creeper is woodbine, so it WON'T attempt to take over the world lol It's perfect, thanks again.

Thanks a bundle,
the not-so-clear differences betweeen inserta and quinquefolia drove me nuts,
and I had a tiny project when the mix up of those two made me look stupid,
you know, when you want it to climb a wall, but they sell you a mislabeld inserta...

PS: and if it is climbing all over trees and shrubs in the woods, it is inserta?